Ramil Comendador – a 35-year-old husband and father of two who worked as a janitor and then legal researcher at the Commission on Elections (Comelec) – said he could not believe how lucky he was to pass the 2016 bar examination.

(“I’m so lucky. I don’t know how to thank the Lord and all those people who gave me strength.”)

He said he was a high school graduate when he started working in the private sector. He got married and had two children, now aged four and eight.

Comendador said he aspired to continue his studies to at least be on the same level as his wife, who is an engineer. 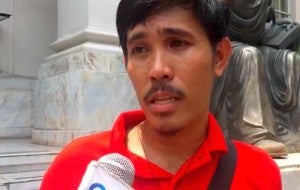 Ramil Comendador used his salary to pay for his law school tuition. SCREENGRAB FROM INQUIRER.net VIDEO

He worked as a janitor at the Comelec from 2007 to 2010. He then took an eligibility examination and was admitted as legal researcher.

In 2011, he entered law school using his Comelec salary for his tuition. He said his wife helped with the household expenses.

While reviewing, he said he got sick and was hospitalized. His condition did not deter him from studying.

“I took my reviewers with me,” he said.

Three months before the examination, he said he rented a small room near his house to concentrate with his studies.

After studying he would go home to cook dinner for for his family.

He advised all aspiring lawyers to have faith and never let anything get in the way of their achieving their dream. /atm

Patrollers to use ‘yantok’ to enforce health protocols