Cayetano tells Lopez: ‘You have to have legal standards to check’

Environment Secretary Gina Lopez on Tuesday once again went through intense grilling at the confirmation hearing of the Commission on Appointments.

Cayetano snapped back at Lopez after she kept bewailing the fact that people were suffering from the effects of mining, saying that all public servants were doing their best to pull people out from their misery.

“The question is standards. You have to have legal standards to check. We want to confirm you, Ma’am. But we want to make sure that we will not have an arbitrary DENR (Department of Environment and Natural Resources). That standards and ideals will be agreed upon,” Cayetano told Lopez.

“I wanna assure you, sir, that whatever we did, there were violations. And all the audit teams agreed that there were violations. We were not breaking the law at all. Allow me… I applaud you for your feeling for the people. So allow me to implement your dreams. Because in a green economy, if you rehab the minds, 95 per cent of the money goes back inside. The problem with mining is that 95 per cent  goes out of the local economy,” she said. 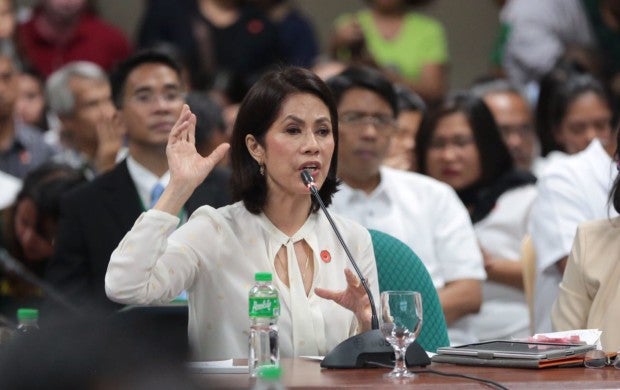 For her part, Occidental Rep. Josephine Sato told the committee she was voting for Lopez’s confirmation because she shares her “passion for responsible mining” as well as environmental and biodiversity conservation.

But she said she was concerned with recent developments especially their argument on “strict compliance to the law.”

She then asked Lopez the legal basis for her memorandum order on the P2 million required from mines to rehabilitate farmlands. Sato said her office had researched mining laws and “did not find any legal basis for this imposition.”

“The basis for that imposition is that prerogative of the DENR Secretary as written in the Mining Act to make sure that resources of the country are utilized in a way that doesn’t disadvantage the people,” Lopez said.

But Sato said Lopez could only do this if she has “a specific authority from the law and it’s not just a prerogative.”

“We are a nation of laws and not of men. To assure government is running well.. everything should be in accordance to the law,” Sato said.

She said that Congress could come up with a law for this and Lopez agreed, asking for her to “advise” her on this matter./ Christine Avendano Philippine Daily Inquirer