What was missing in Davao City’s Labor Day rallies?

For the first time, the President's effigy was not burned. Activists say their dialogue with Duterte on workers' welfare continues
By: Karlos Manlupig - Correspondent / @kmanlupigINQ
Inquirer Mindanao / 11:35 PM May 01, 2017 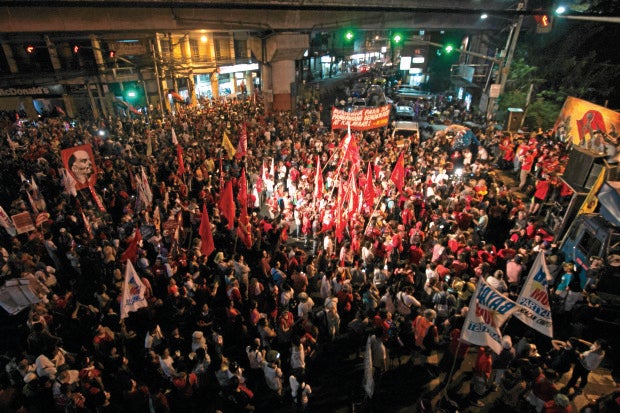 But for the first time in recent history, the May Day rally in Davao City had no effigy of the sitting president to burn.

It was a practice for activists in Davao City during Labor Day to burn an effigy of the sitting President along with the visual representations of the military and the US government.

“There are no effigies of President Duterte because we believe that our engagements with him on issues concerning basic rights are still continuing,” said Bagong Alyansyang Makabayan Southern Mindanao secretary general Sheena Duazo.

The effigy in Davao City was of a fighter plane loaded with missiles along with the faces of US President Donald Trump, Secretary of National Defense Delfin Lorenzana and Armed Forces of the Philippines Chief of Staff Eduardo Año.

“We consider these people as anti-peace for they oppose the efforts to end the conflict and to implement socio-economic reforms,” Duazo said.

The engagements with Duterte include the push for significant reforms in politics, governance, social services and the economy, according to Duazo.

Carl Olalo of the KMU Southern Mindanao commented that while President Duterte has been working on his campaign promises especially for the worker’s sector, labor violations like mass dismissals, union busting and unfair labor practices have persisted and have been documented lately in the Davao region.

These cases and incidents resulted in at least four strikes in big foreign-owned banana plantations in Compostela Valley, Olalo shared.

“As long as our economy remains beholden to foreign capital and is backward and agricultural, massive unemployment will remain,” Olalo said.

“Instead, our people are forced to work for foreign-owned companies which are unafraid to bend our laws to squeeze profits from workers and to prevent them from organizing into unions,” he added.

In Southern Mindanao, Olalo said that many families have been surviving “far below” the living wage of P1,119, with most of them dependent on contractual jobs.

Duterte promised to put a stop to labor contractualization during the election campaign and labor groups have been reminding him to deliver on his campaign promise to workers.

Meanwhile, the protesters said that the long list of specific issues that the government should address could be covered in the peace process.

“These issues can be resolved by pushing for national industrialization and agrarian reform, which are included as priority agenda in the peace negotiations with the National Democratic Front,” Duazo commented.

The protesters said that the signing of the Comprehensive Agreement on Socio-economic Reforms (CASER) would provide concrete solutions in  improving the quality of life for millions of Filipino workers and their families.  SFM