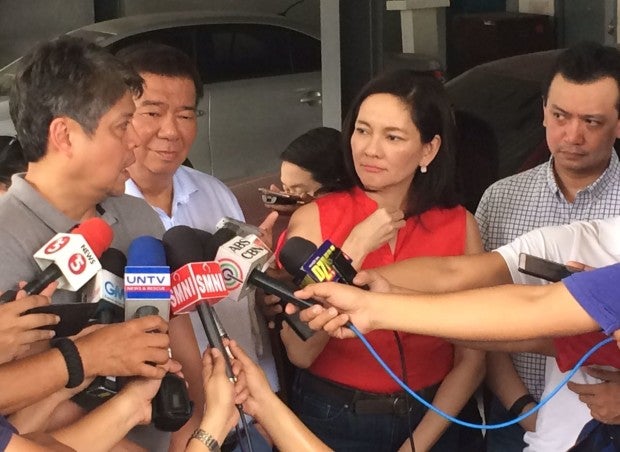 The six-man minority bloc in the Senate will ask the court to allow detained Senator Leila de Lima to attend the session and committee hearings in the Senate on “critical matters” like the death penalty bill.

Senate Minority Leader Franklin Drilon said the minority group or De Lima herself would file a petition in court.

De Lima’s visitors arrived at Camp Crame around 11 a.m. and left past 12 noon.

Drilon said they discussed with De Lima the legislative agenda of the Senate in the next weeks. After more than a month–long break, Congress will resume its session on Tuesday.

“We sought her (De Lima’s) views on the various bills pending in the Senate so that we can carry these views to the floor during the debate,” he said.

“Because she is a duly-elected senator and therefore she has every right to participate in the proceedings in the Senate,” the minority leader added.

Drilon admitted that it would be a “little ambitious” to ask the court to allow de Lima to regularly participate in Senate deliberations.

“Well, to be candid, (to) regularly participate is a little ambitious; baka hindi po makaya, so only in critical matters that will be discussed on the floor or in the committee, we will ask that she be allowed to attend,” he said.

Aside from the issue on the death penalty, Drilon said they would also ask the court to allow De Lima to participate in discussions on the proposed postponement of this year’s barangay elections.

Pangilinan, president of Liberal Party, said they would also request that De Lima would be allowed to participate in the proposal to lower the minimum age of criminal liability from the present 15 years old to nine.