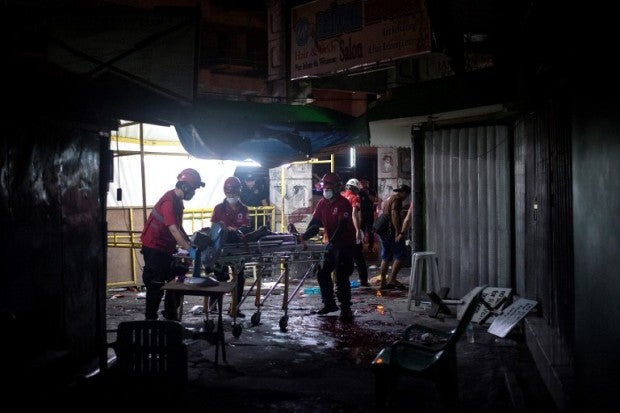 Rescue workers attend to a wounded man on a stretcher in an alley in Manila on April 28, 2017, after a homemade pipe bomb exploded. Fourteen people were wounded in a pipe bomb blast, Philippine police said, but authorities dismissed any link to an Asian leaders’ meeting under way in the capital. / AFP PHOTO / NOEL CELIS

Fourteen people were wounded in a pipe bomb blast in Quiapo, Manila police said Saturday, but authorities dismissed any link to an Asian leaders’ meeting under way in the capital.

The explosion happened late Friday about five kilometers (three miles) from the heavily guarded complex where Association of Southeast Asian (Asean) leaders are meeting and police said they were investigating the possibility it was a revenge assault.

A relative of a 14-year-old boy injured in an attack in the same area by a group of youths earlier in the week had made public threats, police spokeswoman Chief Inspector Kimberly Molitas said.

She described the device as a “homemade pipe bomb” stuffed with low-grade explosives, like the ones used to make firecrackers.

No one has been arrested.

“The incident is not in any way connected to or directed (at) the ongoing ASEAN summit,” Ernesto Abella, spokesman for President Rodrigo Duterte, said in a statement.

“We assure our people that security measures are in place in today’s event and ask the public for their full understanding and cooperation in this regard.”

The Philippines is fighting Islamic militants based in the country’s south who have been blamed by police in the past for deadly bombings as well as kidnappings.

Of the 14 people hurt, six were treated for minor wounds and sent home, while eight others remain in hospital, two of them with serious injuries, Molitas said.

Read Next
Bataan town councilor gunned down
EDITORS' PICK
Look Through: Super Typhoon Karding barrels through parts of Philippines
Motorcycles, smartphones, and cash prizes up for grabs in TNT’s ‘Tuloy Ang Saya’ Raffle in Mindanao
Do all the things you do, faster
POGOs not linked to Illegal online gaming, says Pagcor
House energy committee chair Arroyo bats for cheap electricity
Metro Manila now at moderate risk for COVID-19 — DOH
MOST READ
Robredo supporter tackles elephant in room: No massive fraud in 2022 polls, surveys were just right
Comelec invalidates win of sitting governor in Negros Oriental
DepEd: We are in a crisis situation in education sector
Lives destroyed as armyworms invade Philippine ‘onion capital’
Don't miss out on the latest news and information.