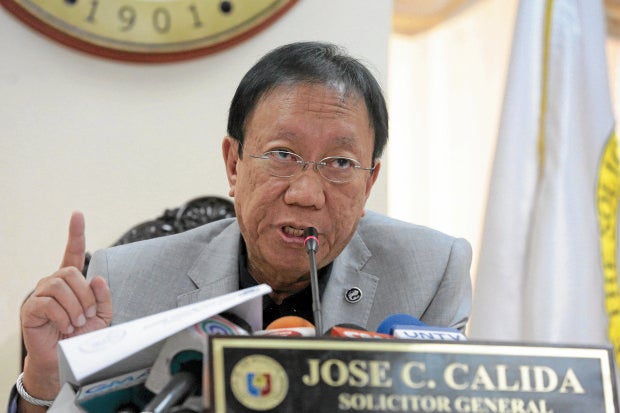 The government’s primary lawyer on Thursday declared void the multimillion-peso joint venture agreement (JVA) between the Bureau of Corrections (BuCor) and a banana exporting company owned by the family of President Duterte’s top campaign financier.

In a statement, Solicitor General Jose Calida said the JVA between the BuCor and Tagum Agricultural Development Co. (Tadeco), owned by the family of Davao del Norte Rep. Antonio “Tonyboy” Floirendo Jr., violated the 1987 Constitution and a Commonwealth-era edict on the use of public lands.

Speaker Pantaleon Alvarez, one of the President’s closest political allies, had questioned the agreement. He filed a graft case against Floirendo, Mr. Duterte’s chief financier in the May 2016 elections, for conflict of interest.

“The JVA … is void as it goes against the Constitution and the Public Land Act,” Calida said, referring to Commonwealth Act No. 141, which mandated that public lands may be used by private entities “only through homestead, sale, lease or confirmation of imperfect title.”

“It should be noted that BuCor and Tadeco entered into a [JVA]. Clearly, a [JVA] is not one of the modes by which agricultural public lands may be disposed of,” he argued.

Calida’s legal opinion on the issue practically preempted an investigation ordered by Justice Secretary Vitaliano Aguirre II, who formed a six-member panel from the Department of Justice (DOJ) in response to a request by Alvarez.

Alvarez had also asked the Office of the Solicitor General to review the agreement.

Calida, however, did not recommend that the BuCor, an agency attached to the DOJ, should rescind the JVA.

According to Calida, the Constitution allows private entities to use public lands for a maximum period of 50 years.

In the case of the Tadeco-BuCor deal, the first agreement was signed in 1969 and was extended for another 25 years in 2003, or until September 2029, he said.

“Tadeco’s use and occupation of the (penal) lands should cease by 2019. The JVA cannot be allowed to last until 2029,” said the solicitor general.

In addition, Calida said the BuCor leased out a portion of the prison farm in Davao del Norte way beyond the 1,000-hectare constitutional limit on the use of public lands.

A review of the agreement also showed that the arrangement between BuCor and Tadeco was actually “not a lease, but a joint venture for the purpose of operating a banana plantation,” he said.

“This is a clear violation of the Public Land Act,” he pointed out.

Calida agreed with Alvarez that the use of the DPPF should have been covered by a public bidding and not just a simple agreement between the BuCor and Tadeco as required by law.

“The right to lease the [penal lands] must be made through a public auction where bidders are required to submit sealed bids,” he said.

Under the deal covering a total of 5,308.36 hectares of the DPPF, BuCor would receive a guaranteed annual production share of P26.54 million to be increased by 10 percent every five years.

But Alvarez claimed the contract was “grossly disadvantageous” to the government and was “lopsided” to the benefit of Tadeco, one of the world’s biggest banana exporters.

Read Next
Duterte shrugs off complaint at ICC
EDITORS' PICK
Look Through: The fate of impounded stray dogs
Palace warns sugar hoarders after raid on Pampanga warehouse
What to watch out for when selecting a video surveillance solution
Unleash the photographer in you this World Photography Day with vivo smartphones
House energy committee chair Arroyo bats for cheap electricity
Metro Manila’s COVID-19 cases on downward trend, but surge not over — OCTA
MOST READ
Man abducted in Batangas gasoline station, found dead in Quezon
LOOK: Miel Pangilinan dazzles in glittery pre-debut shoot
PNP bars US legislators’ visit to De Lima due to lack of authority from court
WATCH: Rick Astley re-creates ‘Never Gonna Give You Up’ music video 35 years later
Don't miss out on the latest news and information.