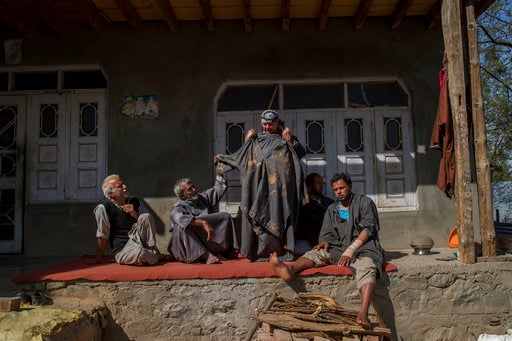 Kashmiri man Farooq Ahmed Dar, right, sits as his mother displays a muddy and torn out robe that Dar was wearing on the day of his alleged abuse at his residence in Chill village, about 60 Kilometers southwest of Srinagar, Indian controlled Kashmir. A viral video that showed the young shawl weaver Dar strapped to a patrolling Indian army jeep as a human shield against stone-throwing protesters incensed Kashmiris and sparked region wide debate. AP

The government said the restrictions ordered Wednesday were made “in the interest of maintenance of public order.” But Pranesh Prakash, policy director for the Indian advocacy group the Center for Internet and Society, called it a “blow to freedom of speech” and “legally unprecedented in India.”

“It not only violates the Indian constitution but also violates international law,” he said.

Most of the applications the government ordered blocked were still working Thursday. However, 3G and 4G mobile connections in the Kashmir Valley have not worked for more than a week now. Broadband and 2G connections have not been affected.

The government has often halted internet service in the region in the past in an attempt to prevent anti-India demonstrations from being organized. But this is the first time authorities have shut down social media following the circulation of videos of alleged abuse by Indian soldiers.

Several recent clips, captured in the days surrounding a violence-plagued local election April 9, have proven to be especially powerful and have helped to intensify anti-India protests.

One video shows a stone-throwing teenage boy being shot by a soldier from a few meters (yards) away. Another shows soldiers making a group of young men, held inside an armored vehicle, shout profanities against Pakistan while a soldier kicks and slaps them with a stick. The video pans to a young boy’s bleeding face as he cries. Yet another clip shows three soldiers holding a teenage boy down with their boots and beating him on his back.

The video that drew the most outrage was of young shawl weaver Farooq Ahmed Dar tied to the hood of an army jeep as it patrolled villages on voting day. A soldier can be heard saying in Hindi over a loudspeaker, “Stone throwers will meet a similar fate,” as residents look on aghast.

“When they were driving me around, they were saying, ‘We will shoot (you),’ and were throwing stones at my head,” Dar told The Associated Press. “I was told not to talk. In one of the villages, an elderly man begged for my release but they didn’t listen to him.”

Police have since registered a criminal case against unnamed Indian soldiers in that case, for the first time citing a video as evidence. In addition, an army “internal inquiry has been initiated into the jeep video,” according to spokesman Col. Rajesh Kalia.

But India’s top law officer, Attorney General Mukul Rohatgi, lauded soldiers for managing to defuse a “nasty situation” by containing the protests and saving the polls.

“Why so much noise?” he asked about the complaints. “Military operations cannot be subject of such discussions on social media,” Rohtagi told the Hindustan Times newspaper.

Students across Kashmir have been rallying this month at anti-India demonstrations, facing off against heavily armed riot police and paramilitary soldiers.

“Most students like me use social media, and some among us use stones to protest against India. Our brothers (militants) use guns for the same purpose,” said Aslam, a 22-year-old science major at the University of Kashmir who gave only his first name out of fear for police reprisals.

Viral videos showing police officers beating civilians or soldiers forcing children to do push-ups in public have “not only outraged the residents here, but also strengthened their belief that the remedy lies in relentlessly seeking justice to end these foul practices,” said Khurram Parvez of the Jammu-Kashmir Coalition of Civil Society.

The rights group has conducted decades of research and estimates that at least 200,000 people have been tortured during Kashmir’s decades-long separatist conflict fueled by anti-India sentiment among a mostly Muslim population and a deployment of hundreds of thousands of troops.

Kashmir’s troubles began in 1947, with the first days of Indian and Pakistani independence, as the two countries both claimed the region in its entirety. They have since fought two of three wars over their rival claims, each administering a part of the territory divided by a heavily militarized line of control.

On the Indian side, most public protest was peaceful until 1989, when armed rebels rose up demanding the region’s independence or merger with Pakistan. Nearly 70,000 people have been killed in that uprising and the ensuing military crackdown.

Among the angriest now are Kashmiris under 35, who have grown up in a politically radicalized society amid the brutal armed conflict and high unemployment. They are also among the most tech-savvy and engaged in social media, and make up two-thirds of the territory’s population of nearly 13 million.

Meanwhile, pro-India activists appear to have countered with their own videos, including two recently circulated showing militants forcing people to chant anti-India slogans at gunpoint.

Authorities have charged three men with attacking an Indian paramilitary soldier after they were allegedly seen in a video heckling the man.

The Indian chapter of Amnesty International has condemned videos from both sides for inciting anger and violence, and urged an investigation.

“There is misuse of social media by the people who are inimical to the peace,” said the region’s police director-general, S.P. Vaid.

Kashmiris accuse India of doing too little to combat abuses. Military courts-martial have convicted 164 soldiers since 1990, punishing them with jail or dismissal from military service, according to an army officer who spoke on condition of anonymity because he was not authorized to speak with media. He said 96 percent of the more than 1,000 complaints received since 1990 were found to be false and fabricated.

The state government itself cannot pursue abuse cases involving soldiers without permission from New Delhi, which has never been granted despite state requests to prosecute more than 50 cases in the last two decades of alleged murder, rape and other abuse.

In the past, Indian authorities have dismissed videos and photos showing alleged abuse as propaganda stunts aimed at destabilizing the India-based administration. Some in Kashmir believe they were actually leaked by military authorities themselves to intimidate locals.

One observer, New York-based Kashmiri scholar Mohamad Junaid, posited that the “distribution of these videos is also about a fragile masculinity reasserting itself” over a population that has once again begun to aggressively challenge Indian rule.

He and other experts warned that India’s heavy-handed rule and inability to placate local protesters were pushing the region toward a dangerous impasse.

“The decision in New Delhi seems to be to push Kashmir and Kashmiris to the wall, said Siddiq Wahid, historian and former vice chancellor of a Kashmir university. “It’s only to be expected the resentment is going to reach new heights.”