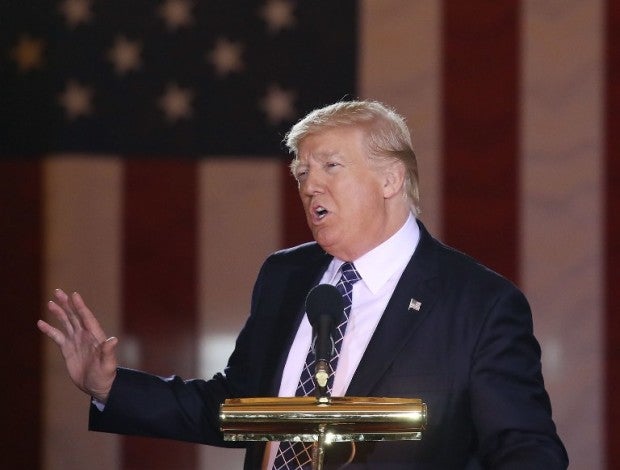 With the government set to exhaust its current funding at midnight Friday, Trump’s White House is under the gun to craft a compromise that would keep the government running while not appearing to cave on the president’s demand that Congress fund a wall on the border with Mexico.

Trump had been on a collision course with lawmakers over the wall, demanding that Congress include funding to start construction in its new spending bill.

Democrats blasted the approach, warning that Republicans risked being blamed for shuttering the government barely three months into Trump’s administration.

With jitters rippling through Washington, Trump apparently agreed to soften his demand days before the deadline.

He told a group of conservative journalists he was open to delaying funding for the wall’s construction until September, a White House official said, according to The Washington Post.

With shutdown fever appearing to break in Washington, Senate Majority Leader Mitch McConnell said he hoped to reach an agreement “in the next few days” on funding the government through September 30, the end of the fiscal year.

“We’re pleased he’s backing off,” Senate Minority Leader Chuck Schumer said of Trump, adding that he was “optimistic” about reaching a timely deal with Republicans, provided they include no poison-pill riders on  such issues as defunding Planned Parenthood clinics.

US senators from both parties signaled that a stop-gap measure of one to two weeks is likely in order to provide ample time to work out the spending deal’s particulars.

Instead of a wall, lawmakers are expressing support for funding a broader set of security measures along the southern border, including the use of drones and other high technology.

“If we want to talk about a combination of all of the above, including technology, walls you can see through, potentially low-level radar, all those things, then I think we can work together in a bipartisan way to get something done,” Democratic Senator Jon Tester told AFP.

Building the wall was Trump’s signature campaign promise, but Democrats note that Trump pledged Mexico would pay for it.

Even as the White House appeared to soften its rigid posture, Trump sent mixed messages on Tuesday.

“Don’t let the fake media tell you that I have changed my position on the WALL. It will get built and help stop drugs, human trafficking etc,” he said on Twitter.

White House spokesman Sean Spicer echoed that message. But when questioned at a briefing, he declined to explicitly say whether Trump wants the spending deal for the remainder of 2017 to include wall funding.

Congress, returning from a two-week break, now has four days to strike a deal.

Lawmakers have warned that a stopgap measure, known as a continuing resolution, may be needed to give Congress breathing room to finalize the spending details.

With the 100-day mark landing on Saturday and few legislative victories under his belt, Trump is pressing to fulfill another campaign pledge.

As a candidate, he repeatedly vowed to reform the tax code and slash the corporate tax rate from 35 percent to 15 percent.

An announcement on such reforms is due Wednesday, according to Trump, and all eyes will be on the tax rates the White House proposes and their impact on the national debt.

Conservatives have sought a reduction in tax rates for years, but they are also adamant about reducing the debt. Some Republicans appeared hesitant to embrace such a deep cut in corporate tax rates.

If there are no significant tax breaks for small business or working-class Americans, “that would certainly for me be a non-starter,” Democratic Senator Debbie Stabenow said.

But it appears increasingly unlikely such a plan would be debated this week. CBB

Read Next
Thai man murders child, kills himself on Facebook Live
EDITORS' PICK
Unleash the photographer in you this World Photography Day with vivo smartphones
Palace warns sugar hoarders after raid on Pampanga warehouse
Look Through: The fate of impounded stray dogs
What to watch out for when selecting a video surveillance solution
House energy committee chair Arroyo bats for cheap electricity
Metro Manila’s COVID-19 cases on downward trend, but surge not over — OCTA
MOST READ
LOOK: Miel Pangilinan dazzles in glittery pre-debut shoot
Man abducted in Batangas gasoline station, found dead in Quezon
August 19 a special non-working holiday in Quezon City
Palace warns sugar hoarders after raid on Pampanga warehouse
Don't miss out on the latest news and information.