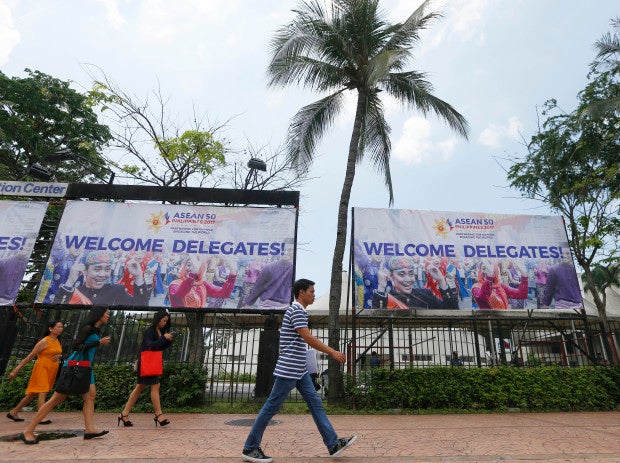 People walk past tarpaulins heralding the April 26-29, 2017 ASEAN Leaders’ Summit Tuesday, April 25, 2017 at the Philippine International Convention Center, the summit venue in suburban Pasay city south of Manila, Philippines. The Philippines is hosting the summit of 10-member ASEAN (Association of Southeast Asian Nations) with the theme: Partnering for Change, Engaging the World.” More than 40,000 police and troops are mobilized for the summit.(AP Photo/Bullit Marquez)

The Metropolitan Manila Development Authority (MMDA) appealed to the public to defer nonessential trips to Manila, Makati and Pasay starting tomorrow till April 29 to avoid aggravating traffic in roads being used for the 30th Association of Southeast Asian Nations (Asean) Summit.

The MMDA will not be closing down roads except those within the vicinity of the Cultural Center of the Philippines complex, but it will implement a “stop-and-go” scheme on streets where heads of state and their delegations are expected to pass.

The streets to be locked down include Sen. W. Diokno Boulevard, Jalandoni Street, V. Sotto Street, Bukaneg Street and A. Dela Rama Street in Pasay, while the stop-and-go scheme will be implemented on Arnaiz and Makati avenues in Makati.

In an advisory, the MMDA said that once a head of state moves to and from Skyway and a 30-minute lockdown begins, all vehicles exiting Paseo and going to Arnaiz should turn right to Benavidez Street (counterflow), right to Trasierra, then left to Gamboa and right to Rufino, all the way to Chino Roces or Javier. Motorists can also take a U-turn to Amorsolo/Rufino, then right to Fernando toward their destination.

If Esperanza Street will be filled with cars due to the lockdown, all vehicles should take Paseo, then right to Ayala toward Edsa.

A rerouting scheme on Roxas Boulevard will also be implemented. From the boulevard, southbound motorists should turn left at P. Burgos, Kalaw or UN Avenue, then turn right at Taft, right at Buendia or Edsa, then left to Roxas Boulevard to destination.

Northbound motorists should turn right at Edsa, Arnaiz or Buendia, then left at Taft and left at UN Avenue or Finance Road to destination. —JOVIC YEE