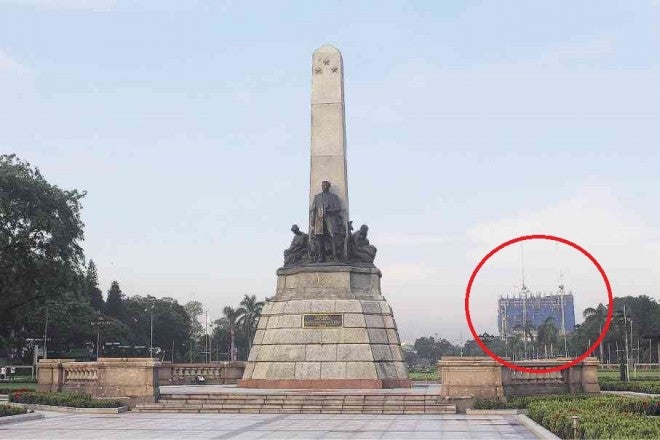 FILE – TAKING its own photos of Rizal Monument and Torre de Manila (encircled), DMCI says “one may stand near the monument and choose certain angles to avoid or, at the very least, minimize the building’s intrusion.” PHOTO FROM DMCI

DMCI Project Developer Inc. on Tuesday hailed the Supreme Court decision allowing the resumption of the construction of its controversial Torre de Manila condominium along Taft Avenue, which has been dubbed as the “national photobomber” for marring the view of the Rizal Monument in Luneta.

In a statement, DMCI Homes described the high court’s ruling as “fair and just,” as it assured its customers and future residents of an updated timeline of construction.

“DMCI Homes welcomes the fair and just decision of the Supreme Court.  Moving on, we will immediately resume construction to finally end the undue suffering of our stakeholders, most especially our workers and future residents who depended on our commitment to complete the project,” DMCI Homes said in a statement.

“DMCI Homes will immediately advise its customers and future residents on the updated construction timeline since the initial target completion date has been critically affected by the long-standing temporary restraining order (TRO). DMCI Homes promises to continue its thrust of providing quality homes to address the need for mid-income housing and urban renewal in the City of Manila,” it added.

Voting 9-6, the high tribunal in a session in Baguio City junked the petition by the Order of the Knights of Rizal in September 2014 to stop the construction of the 49-storey condominium, saying “there is no  law that prohibits” such.

In a media briefer, the SC Public Information Office said the petition was dismissed because “the Court has no jurisdiction over the subject matter,” “the petitioners have no standing to sue,” and “they stand to suffer no injury.”

The TRO issued on June 16, 2015 was also lifted as a consequence of the decision./rga