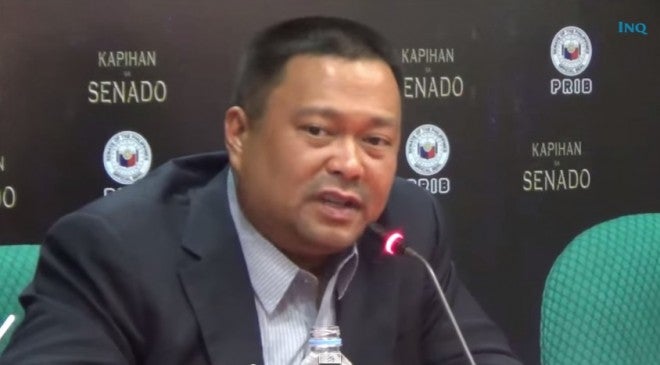 Three senators on Tuesday scoffed at the filing of case against President Rodrigo Duterte at the International Criminal Court (ICC) in the Hague, one calling it part of an ouster plot against the Chief Executive.

“Timing in filing of case against President Duterte in ICC is obviously meant to embarass the President in the upcoming ASEAN,” Senator Joseph Victor “JV” Ejercito said in a text message to reporters.

The Philippines will host the Association of Southeast Asian Nations (Asean) Summit in Pasay City this week.

“Still part of a conspiracy to oust the President by destroying his credibility in the international community,” Ejercito, member of the Senate majority bloc, added.

The senator was reacting to the crimes against humanity filed Monday at the ICC by lawyer Jude Josue Sabio against the President and 11 other individuals over the killings of drug suspects in the Philippines.

Also reacting on the issue, Senate Majority Leader Vicente “Tito” Sotto III said: “At least it will be a dictionary changer. Humanity will now be defined as drug pushers fighting back against police ops.”

Sotto also questioned the timing of the filing of the case against the President.

“Obvious! The enemies of the President are so despondent about his foreign relations successes in the Asean,” he said.

“He is so admired in the Asean region that they are trying to smear his image. The reason is because Asean leaders are also against illegal drugs while EU (European Union) leaders are not. Just like his detractors,” the Majority Leader added.

Senator Panfilo Lacson, meanwhile, said getting the ICC to take jurisdiction over the case would be a “tall order” for those who behind the filing of the case.

“Those behind the filing of the complaint before the ICC should satisfy at least two basic requirements – that the national courts, meaning our RTC’s and even the Supreme Court are unwilling or unable to prosecute those being charged, or when the UN Security Council or individual states refer the case/s to the ICC,” Lacson, another majority member, said in a separate text message.

“In order to determine if the ICC will give due course to the complaint filed by Atty Sabio, let us ask ourselves if these requirements or conditions are met, than we can draw our conclusion from there.”

“I would like to believe that it is going to be a tall order, even a disappointment for people who wish that the ICC take jurisdiction over PRRD (Duterte’s initials) and other individuals charged in this instant case,” Lacson added. CBB