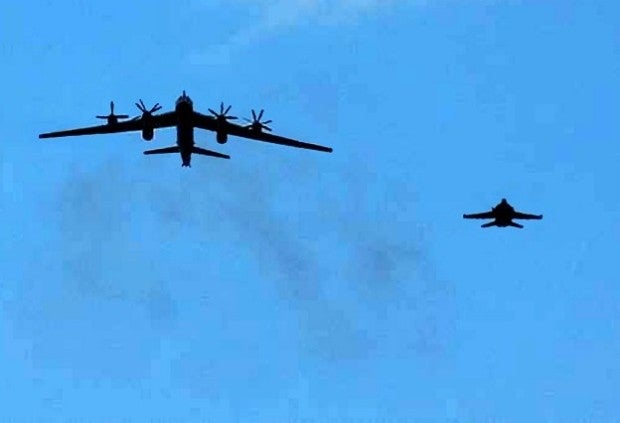 An F/A-18 Hornet from Carrier Air Wing (CVW) 11 from the aircraft carrier USS Nimitz (CVN 68), escorts a Russian Tu-95 Bear long range bomber on February 9, 2008 south of Japan. The Pentagon said on Monday, April 24, 2017, that Tu-95 bombers flew a series of missions near Alaska which prompted US and Canadian fighter jets to intercept them. AFP

The North American Aerospace Defense Command (NORAD) and the Pentagon said Tu-95 Bear bombers were spotted in international air space on three occasions — twice near the Aleutian Islands and once near mainland Alaska and Canada.

The bomber missions occurred April 17, 18 and 20, and on two occasions NORAD launched fighters to conduct “safe and professional” intercepts.

Mid-air interceptions are routine in international air space, and Russian jets frequently scramble to fly alongside US spy planes in and around the Baltic Sea and near Russia.

But Pentagon spokesman Navy Captain Jeff Davis said there had been a lengthy pause in such operations off Alaska, possibly caused by the enormous, propeller-powered Tu-95s having been grounded due to maintenance issues.

“This was the first time in about two and a half years that we have seen Russia conduct long-range bomber missions like this in and around Alaska,” Davis said.

NORAD spokeswoman Lori O’Donley said a number of Il-38 maritime patrol and anti-submarine aircraft were also spotted and identified in international airspace in the same vicinity on April 19. CBB