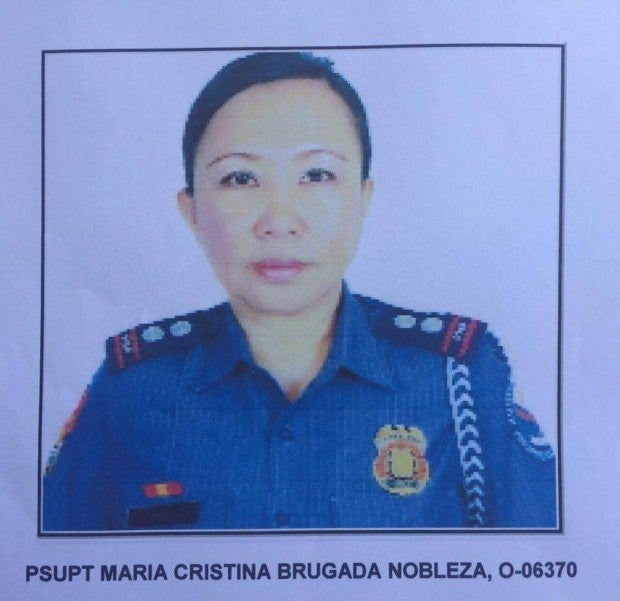 FILE PHOTO FROM THE PNP

MANILA — Supt. Maria Cristina Nobleza, the police officer who was caught with a suspected Abu Sayyaf member and another woman with ties to Abu Sayyaf leaders in Bohol over the weekend, was relatively new to the Philippine National Police Crime Laboratory in Southern Mindanao.

The PNP Crime Lab was Nobleza’s posting at the time of her arrest.

“We still have to check on her background and look at her service record in so far as her previous postings are concerned,” said Chief Insp. Andrea dela Cerna, spokesperson of the Police Regional Office 11, adding that Nobleza was only assigned in the region in 2016.

This meant that Nobleza was not a member of the PNP Crime Lab of the region when the Samal raid by the Abu Sayyaf took place on Sept. 22, 2015, when three foreigners and a Filipina were kidnapped from the Holiday Ocean View Samal Resort, she said. (Canadians John Ridsdel and Robert Hall were later beheaded by the Abu Sayyaf in 2016 but Norwegian Kjartan Sikkengstad and Filipina Marites Flor were separately freed.)

Dela Cerna said they also found out that Nobleza was a Muslim convert. (In Manila, PNP Director General Ronald Dela Rosa said they got information that she was a ‘Balik Islam,” a person returning to her Muslim faith, and that she had fallen in love with suspected Abu Sayyaf member, Reenor Lou Dungon.)

Another police source said Nobleza had long been separated from her husband and has been living with Dungon, the man whom police have tagged as an Abu Sayyaf member.

Police have received information that Dungon is a relative of an Abu Sayyaf leader.

Also caught with Nobleza and Dongon while their vehicle tried to flee from a police checkpoint, was a woman with three daughters married to Abu Sayyaf leaders.  SFM