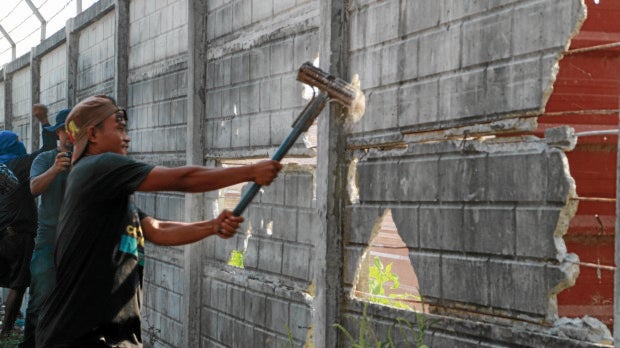 FORCIBLE ENTRY Farmworkers tear down the concrete fence put up by Rizal Commercial Banking Corp. in an attempt to gain entry to 500 hectares bought by the bank from the Cojuangcos in Hacienda Luisita in Tarlac province. —CONTRIBUTED PHOTO

CITY OF SAN FERNANDO—Farmers belonging to the Kilusang Magbubukid ng Pilipinas (KMP) and their supporters on Monday took possession of what was left of the more than 6,000 hectares of Hacienda Luisita in Tarlac province.

Despite the presence of 500 policemen and about 50 private guards, 700 KMP members broke through a concrete fence and gained access to 500 ha of land in Barangay Balete in Tarlac City.

The property was sold by the Cojuangco family to Rizal Commercial Banking Corp. (RCBC) in 1996.

Edison Diaz, head of Barangay Lourdes near Balete, said tension was high in the area but no violence erupted.

About 400 KMP members arrived there on Sunday night, joined by a second batch on Monday morning, Diaz said.

Policemen sent to the site did not stop the farmers, who left the site on Monday afternoon, according to Geraldine Yumul, assistant Tarlac provincial director of the Department of Agrarian Reform (DAR).

“We have started reclaiming lands that are ours. We are going to proceed with our collective ‘bungkalan’ (land cultivation),” he said.

The KMP mass action came on the fifth anniversary of the Supreme Court’s April 24, 2012, decision ordering the DAR to give 4,500 ha of land to more than 6,200 farm workers in Hacienda Luisita.

The KMP used the term “OccupyLuisita” in its media alerts, drawing parallels to the successful March 8 takeover of government houses by the urban poor group Kalipunan ng Damayang Mahihirap (Kadamay) in Pandi town in Bulacan province.

Kadamay has not been evicted by the government.

The urban poor group expressed its support for the KMP mass action.

“Kadamay expresses its full support for the OccupyLuisita movement as it echoes our own call for the government to own up to its sins and finally begin to give to people what is due them,” the group’s chair, Gloria Arellano, said in a statement.

She said, “The Occupy movements are just. The severity of the crisis requires stronger action and militant engagement with the government because, in the end, we are only claiming the rights denied us.”

“Hopefully, the growth of these movements will push the government to actually fulfill its duty and serve the people,” she added.

KMP chair Joseph Canlas said the takeover was part of a nationwide campaign to acquire and cultivate large agricultural estates.

Anakbayan Rep. Ariel Casilao, who supported Kadamay in the Bulacan housing takeover, said the “claim of the farmers in Hacienda Luisita was moral, historical and even legal.”

Agrarian Reform Secretary Rafael Mariano, who used to head the KMP, has revoked the conversion order covering the RCBC land, “hence, there are no legal impediments for the farmers to occupy these lands, but only the outright opposition of the Cojuangcos and their partners,” Casilao said.

The 500-ha property owned by RCBC used to form part of the 4,915 ha covered by the stock distribution option (SDO), one of the ways farmers could benefit from agrarian land under the Comprehensive Agrarian Reform Program.
The farm workers and their former landlords opted for the SDO in 1989.

The 4,915 ha were converted into shares by Hacienda Luisita Inc. (HLI), with the Cojuangco family-owned Tarlac Development Corp. owning 67 percent and more than 6,000 farm workers, 33 percent.

Ambala petitioned the courts in 2003 to revoke the SDO and distribute the lands to the farmers instead.

Following the 2004 strike in which seven farm workers were killed, the Presidential Agrarian Reform Council approved the petition and ordered a compulsory acquisition of lands that the Supreme Court upheld with finality on April 24, 2012.

However, the Supreme Court excluded the 500 ha from distribution.

It did not nullify the property’s sale to RCBC after a land-use conversion order was issued over the property in 1995.

The high court instead ordered HLI to pay farm workers P1.3 billion, which included the proceeds from the sale of 81 ha to the Bases Conversion and Development Authority for the Luisita interchange of the
SCTEx (Subic-Clark-Tarlac Expressway).

Noel Mallari, one of the petitioners in the SDO revocation case, said RCBC bought the 500 ha in 1995, for which HLI gave P30 million to farm workers as their share from the sale.

But KMP said the RCBC lot was “illegally converted and sold” by Tarlac Development Corp.-Hacienda Luisita.