Arrest warrant out vs Leyte ‘bomber’ 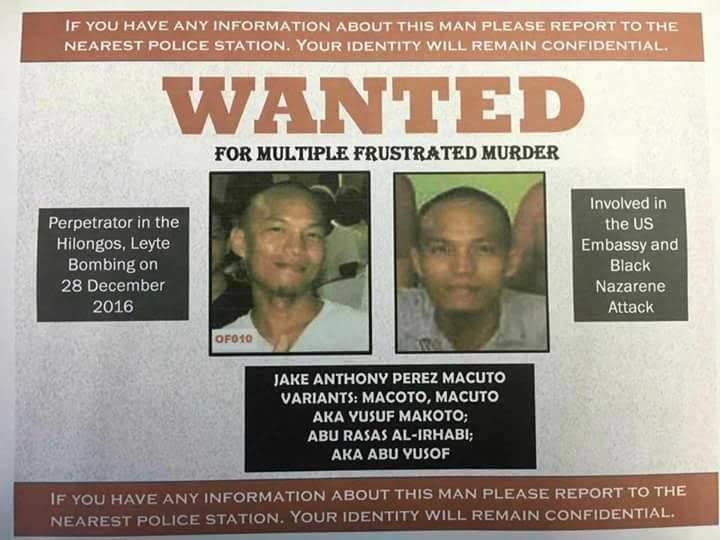 Police have distributed flyers to inform the public the arrest warrant for Jake Anthony Perez Macuto, who has been tagged in the twin bombings of the plaza in Hilongos town, Leyte on Dec. 28, 2016. (PHOTO BY ROBERT DEJON / INQUIRER VISAYAS)

TACLOBAN CITY, Leyte — An arrest warrant was issued against the suspected bomber in the twin explosions that rocked the park during a fiesta in Hilongos town, Leyte on Dec. 28, 2016, that wounded 32 people.

Macuto, along with two unidentified companions were charged with multiple frustrated murder at the sala of Judge Suarez Abando of Regional Trial Court Branch 18.

At least 32 persons – 10 of them children – were hurt when two improvised explosive devices went off in a span of a minute while more than 1,000 people were watching an amateur boxing match at the Rizal Plaza, across the Hilongos municipal building, which was part of the fiesta festivities.

Macuto was said to have resided in Barangay Concepcion, Hilongos, Leyte before staging the bombing.

The Muslims in Hilongos mostly are residing in Concepcion village and some of the Muslims have pointed at Macuto as the perpetrator of the bombings. He was said to be a recruit of the Maute group, allegedly the local arm of the ISIS in the Philippines.

The picture of Macuto has been posted in different places in the region and across the country as he has also been tagged in the attempted attack on the United States Embassy in Manila and the Black Nazarene procession in Quiapo.

Mayor Albert Villahermosa of Hilongos said in an earlier interview that all evidence of the bombing pointed to Macuto and his unidentified cohorts as the perpetrators.

Villahermos said he knew the parents of Macuto and his father belonged to a prominent family in Hilongos.

But he said he didn’t personally know the 25-year-old Macuto because the suspect had been living in Cavite with his mother.  SFM