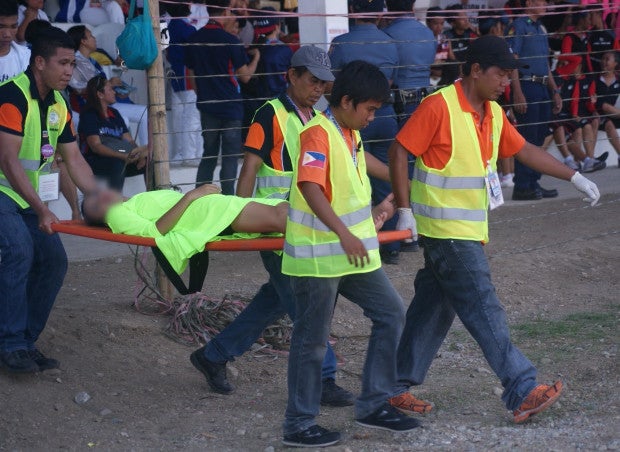 A performer during the opening rites of the Palarong Pambansa is carried out of the stadium in San Jose, Antique, on Apr. 23, 2017, after fainting. (PHOTO BY ALBERT MAMORA, CONTRIBUTOR / INQUIRER VISAYAS)

SAN JOSE, Antique — The opening program of the Palarong Pambansa on Sunday was moved earlier despite the sweltering heat upon instructions of the Presidential Security Guard (PSG) due to the arrival of President Duterte, according to Antique officials.

Many of those who participated in the program fell ill after being exposed for hours to the mid-day and early afternoon heat.

The Antique provincial health office refused to release information to the Philippine Daily Inquirer on those who fell ill or were given attention because a report was purportedly given to the Antique Palarong Pambansa Organizing Committee (APPOC).

But the APOC said it did not receive any report when the INQUIRER checked around noon on Monday.

Sources said 168 mostly children athletes and performers were given medical attention, and 48 who were brought to the Angel Salazar Memorial General Hospital in the capital town of San Jose. The sources said five of those brought to the hospital were confined for existing ailments.

The APPOC finally released information late in the afternoon, showing that 165 delegates and participants were given medical attention and 48 were brought to the Angel Salazar Memorial Hospital.

Eight of those brought to the hospital were admitted.

“We apologize for what had happened,” Antique Gov. Rhodora Cadiao, told the INQUIRER.

Cadiao said the original plan was to hold the parade and opening program at a later time.

“…When the PSG came, all our plans were changed. We did not know when the President would (exactly) arrive. So that it was sort of adjusted for the convenience of the arrival our President,” the governor said.

Reynaldo Gico, officer-in-charge of the Department of Education (DepEd) in Antique, said the original schedule was to have the parade at 3 p.m. and the traditional opening program at 6 p.m.

Lawyer Arthur Lastimoso, APPOC head, said the PSG wanted all those attending the ceremony to be at the sports complex by 2 p.m.

Gico said the carrying of bottled water inside the sports complex was prohibited.

Water dispensers were provided at the grandstand but there were no cups or glasses.

Due to the change in schedule, delegations from 18 regions started assembling at the Antique National School and San Jose Plaza at 11 a.m. before parading to the sports complex about a kilometer away.

The athletes and other members of the delegations marched around the oval and briefly performed before the grandstand to express regional culture, pride and competitive spirit. They then proceeded to designated areas in the open field. Guests, officials and spectators were seated at the roofed grandstand and bleachers.

While many of the athletes and officials had umbrellas as part of their uniforms, they had to stand and wait at the open field for the duration of the program.

The formal program was supposed to start at 3 p.m. upon the arrival of the President but he arrived at the sports complex around 4:15 p.m.

The preliminary activities before the President’s arrival were disrupted after medical teams ran in front of the grandstand as dancers and athletes started fainting or collapsing.

Somebody took the microphone, instructing those in field, on orders of Education Secretary Leonor Briones, to seek shelter where they would be given water.

After resting for around 30 minutes waiting for the President’s arrival, the regional delegations were instructed to return to the open field in front of the grandstand shortly before the President entered the sports complex.  SFM