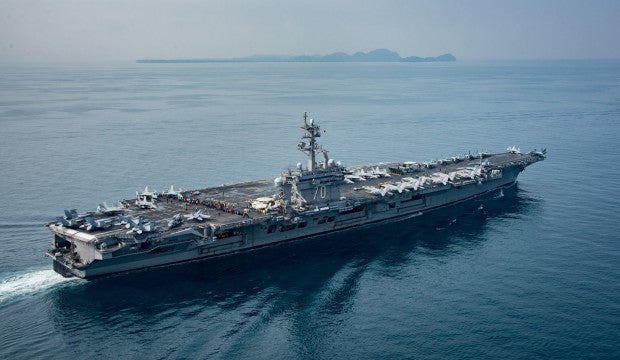 The US supercarrier Carl Vinson is days away from reaching the Korean Peninsula and China is showing concern. Chinese President Xi Jinping called US President Donald Trump on Monday, April 24, 2017, and urged ‘restraint.’ PHOTO FROM USS CARL VINSON FACEBOOK PAGE

BEIJING, China — Chinese President Xi Jinping urged “restraint” on North Korea during a phone call Monday with US President Donald Trump, days before an American supercarrier is due to arrive in the Korean Peninsula.

The conversation came amid growing concerns that Pyongyang will conduct another nuclear or missile test to mark the 85th anniversary on Tuesday of the founding of its Korean People’s Army.

“(China) hopes that the relevant parties can maintain restraint and avoid actions that would increase tensions in the Korean Peninsula,” Xi said, according to a statement from the foreign ministry.

“The only way to realize denuclearization in the Korean Peninsula and quickly resolve North Korea’s nuclear problem is for each relevant party to fulfill its duties.”

It was the second phone call between the two leaders since their summit at Trump’s luxury resort in Florida early this month.

Speaking in Sydney on Saturday, US Vice President Mike Pence said the American aircraft carrier Carl Vinson would arrive in the Sea of Japan, bordering the Korean Peninsula, “in a matter of days”.

The ship joined other warships for joint exercises with Japan in the Philippine Sea on Sunday.

Confusion has clouded the carrier group’s whereabouts in recent days after President Donald Trump suggested the “armada” was steaming towards North Korea when in fact it was sent towards Australia.

Pence also renewed calls for Beijing — Pyongyang’s only major ally and largest trade partner — to use its “unique” position to bring Pyongyang to heel.

“We do believe China can do more.”

In February China announced it was halting all imports of coal from North Korea — a crucial earner for Pyongyang — for the rest of the year.

China also issued a stern warning earlier this month that a conflict over North Korea could break out “at any moment”, as Pyongyang vowed a “merciless” response to any US military action.

The comments came ahead of a failed missile test coinciding with the 105th anniversary of the birth of North Korea’s founder, Kim Il-Sung.

The North has ramped up its rhetoric in recent weeks, threatening to hit back against any provocation from the US and its regional allies, Japan and South Korea, which both host large American military contingents.

Before his latest conversation with Xi, Trump called Japanese Prime Minister Shinzo Abe, speaking to him about the joint drill between the  Carl Vinson and Japan’s Maritime Self-Defence Force.

“I told him that we highly appraise US words and actions that show all options are on the table,” Abe told reporters following the call.

“We completely agreed that we strongly demand restraint by North Korea, which has repeatedly taken dangerous provocative actions.” CBB/rga