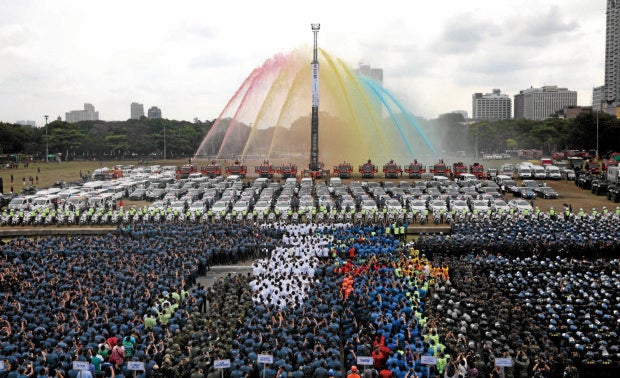 SENDOFF RITES Awater cannon salute is executed before the logo of the Association of Southeast Asian Nations (Asean) 2017 in a sendoff ceremony at Rizal Park’sQuirino Grandstand in Manila for security and emergency personnel whowill be fielded during the Asean summit from April 26 to 29. —MARIANNE BERMUDEZ

The government is deploying 40,000 security and emergency personnel to thwart any local or international terror threat to the Association of Southeast Asian Nations (Asean) summit in Manila this week, government officials said on Sunday.

Ambassador Marciano A. Paynor Jr., director general for operations of the Asean 2017 National Organizing Council, said the government did not want a repeat of recent terror attacks in Western capitals in Manila during the summit from April 26 to 29.

“We can no longer consider only domestic security issues. As we all know, European capitals—London, Paris, Brussels—they all have had very serious terrorist attacks,” Paynor said.

“We have been lucky thus far. We would not want any of these … happening here, especially if we have guests and especially as we are hosting these Asean meetings throughout the year,” he said.

Department of the Interior and Local Government officer in charge Catalino Cuy said no specific threat against the summit had been monitored so far.

“But we are paid to be paranoid in our preparations,” he said. “We consider all possible threats to activities.”

“We always consider that possible threat and we’ve included that in our planning. We have set contingencies in case we monitor any threat like that as we approach the activity here in Manila,” Cuy said.

Paynor, Cuy and Philippine National Police Director General Ronald dela Rosa spoke before 9,000 policemen, soldiers and emergency personnel who would secure the summit at a sendoff ceremony in Rizal Park on Sunday morning.

Dela Rosa said the target was to have “zero incidents” during the summit and joked that he would have participating soldiers and policemen shave their heads if something bad happened.

Paynor appealed to citizens to immediately report to the police any suspicious activity in their areas  during the summit.

“Each individual citizen is an added pair of eyes and ears. So, it is our duty as citizens to report anything that is out of the ordinary. Please approach the nearest officer and we will determine if it is a cause for concern,” he said.

Paynor said around 2,000 Asean delegates were expected to attend the Asean summit.

He noted that the summit, which will be attended by all the leaders of the 10 Asean countries, is just the 56th of the 139 meetings scheduled in Manila this year.

“As we said earlier, this is only meeting No. 56. There are a total of 139 meetings, so we have two-thirds more to come and every single one of these meetings we treat the same,” he added.

Paynor said the Asean countries had already confirmed that their heads of state would attend the summit except for Burma (Myanmar), which would send State Counselor and Nobel Peace Prize winner Aung San Suu Kyi.

“Myanmar has always designated Aung San Suu Kyi as the representative of Myanmar in these multilateral meetings,” Paynor said.

“Madame Aung San who is higher than a minister and lower than head of state or head of government but she is designated head of delegation of Myanmar so we elevate her to the same level as the other heads of state and government,” he added.

Paynor said the government would try its best not to cause discomfort to travelers and motorists during the summit.

He said the emergency “notice to airmen” grounding airplanes for an hour and a half during the Asia-Pacific Economic Cooperation forum in 2015 would not be implemented “in the same way” during the Asean summit.

“As much as possible, we are trying to avoid a repeat of that situation. The leaders will have priority landing and taking off but all other commercial flights should not be affected as much as possible,” he said.