Trash talk: Why you shouldn't throw your gadgets in the garbage | Inquirer News

The sight and smell of burning metal is common at Smokey Mountain, a former landfill in Manila that officially closed down two decades ago.

But the looming mountain of trash has remained an attractive source of livelihood among scavengers who sell the scrap metal exposed by the slow-burning fire for almost P200 per kilo.

Among regular buyers of such electronic trash is Danilo (not his real name), who has lived all his life at Smokey Mountain, where old gadgets disposed of are either dismantled and sold for parts, or repaired and find a second life.

He was born in the area in 1960, said Danilo who acknowledges that buying scrap metal from scavengers and reselling them can be dangerous.

“Sometimes you’ll get injured (when you dismantle old electronics),” he said. “Sometimes when you break things open, some parts will hit you,” he added. As for burning copper wire, they’re careful to keep the fires small and under control, he said. 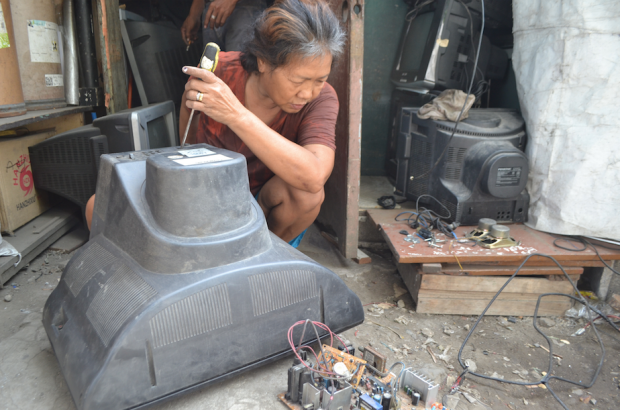 RESTORE OR DESTROY A woman opens up an old television set to check if it can still be repaired and sold. If it is beyond repair, they will have to dismantle it and break its glass to get the copper wires and other valuable metals. —KRISTINE ANGELI SABILLO/INQUIRER.NET

But Danilo and others who mine the garbage heap for discarded electronics that can be reused are not as aware of the far more insidious hazards of their trade: the toxins released by burning plastic and copper wires.

“Informal recyclers” like Danilo are the most affected by the e-waste (or electronic waste) problem because they are directly exposed to such chemicals, Dizon said.

Then there’s the environment. “(E-waste) directly contaminates the soil and bodies of water,” said the EcoWaste official, noting that many dumpsites and landfills are near bodies of water and watershed areas. This means that the drinking water will also be affected, Dizon said.

Dizon, Sañez and environmental groups worry that millions of electronic devices sold in the local market every year end up in open dumpsites and communities like Smokey Mountain where improper disposal of e-waste has spurred a local economy of scavengers and junk shops.

One only has to look at the buying habits of Filipinos to realize the magnitude of the looming problem of e-waste.

The Philippines has more mobile phones than people, with the digital research group We Are Social putting the country’s mobile connections at 119.21 million, more than the estimated 2016 population of 101.47 million.

Dizon said Filipinos often buy into the so-called “technology craze,” and own two or more mobile phones to take advantage of network promos on calling, texting and internet use. This, in turn, creates more e-waste.

According to a 2017 study by the United Nations University, the amount of e-waste in East and Southeast Asia has outpaced population growth, partly because of new gadgets and growing disposable incomes.

Sañez said this might be because sentimental Filipinos tend to hold on to old electronic devices, although their eventual disposal could pose a challenge later on.

While the burning of wires and garbage is prohibited under Republic Act No. 9003 (The Philippine Ecological Solid Waste Management Act) and Republic Act No. 8749 (Clean Air Act), scavengers and recyclers like Danilo consider survival a more pressing priority.

Danilo lives on top of the former dumpsite in a makeshift house filled with sacks of scrap metal and a backyard overflowing with bottles and cartons. A large patch of land once “mined” for scrap metal now blooms with an odd mix of plants and garbage.

“We’re not allowed to construct houses here but we decided to do that and to plant vegetables to make the most of the idle land,” he said.

During the rainy season, Danilo and his neighbors plant corn, okra, eggplant, peppers and sweet potato, seemingly unaware of the possible effects of farming a former garbage dump that was once filled with plastic, metals and possibly, chemicals from hazardous waste.

“We don’t know what kind of toxins from metals or chemicals are being absorbed by these plants,” Dizon said.

According to the UN University study, consumers and dismantlers like Danilo often resort to illegal dumping of e-waste because of their lack of awareness about the hazards of their trade.

They also lack incentives to find alternative ways of e-waste disposal, not to mention that such alternatives could be inconvenient or impractical because of the lack or absence of suitable disposal sites. Then there’s the lax enforcement of laws and ordinances about e-waste disposal.

Marlo Molar, a Taguig employee, said he keeps his old gadgets because he knows how toxic they can be to the environment. “(But I) do not know how to dispose it properly,” he added.

Under RA 9003, or the Solid Waste Management Act, electrical wastes are classified as special, and local governments are directed to have “special collection” of e-waste from households.

But Dizon acknowledged the need for stricter implementation and a “more concrete policy on the part of the DENR (Department of Environment and Natural Resources).”

Sañez said his unit was already working with the National Solid Waste Management Commission in finding ways to encourage proper disposal of e-waste.    Still, he admitted, “right now the appreciation of the local government is very low.” 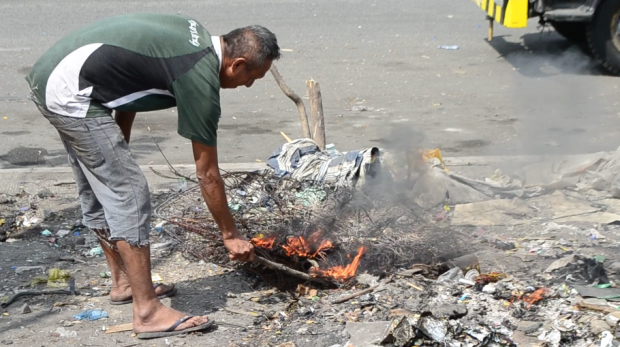 Both Sañez and Dizon agreed on the need for the so-called extended producer’s responsibility (EPR) law that will make companies responsible for the proper disposal of their electronic products. It’s already a global trend, Sañez said.

An EPR policy would require companies to properly dispose of their appliances and gadgets when they reach end-of-life. Instead of throwing out an old refrigerator or desktop computer, a customer can have the company that sold it deal with its proper disposal and recycling.

Sañez said people who buy television sets from companies participating in the collective EPR can easily dispose of their old units through the facility.

The cost of disposal will be included in the item’s retail price, as is the practice in other countries. Incentives for consumers can include discounts if they return their old units.

Industries can be encouraged to have “collective EPRs” by setting up their own nonprofit organizations to handle their e-waste. For instance, television manufacturers and distributors can pool their funds  and set up their own e-waste processing facility.

Some companies have now started take-back programs as part of their corporate social responsibility.

There’s Globe Telecom’s “Project 1 Phone,” which enables customers to drop off their old and broken electronics at Globe stores from where they are shipped to a recycling company. Profits made by that recycling company are donated to help build schools in typhoon-hit provinces, said Globe citizenship manager Rofil Magto.

While such efforts are laudable, not enough companies are doing it, Dizon said.

Making the EPR mandatory at this point could make some businesses think that “the environmental policy has become a technical barrier to trade,” said Sañez, who believes that companies will eventually realize how the “environmentally sound management” of e-waste can benefit them.

“Consumers will patronize (them) because when we enforce the policy (of stricter e-waste disposal), individual disposal will become very expensive,” he added.

Back on Smokey Mountain, groups like Sambayan ng Muling Pagkabuhay Multipurpose Cooperative spearhead efforts to train residents on the proper and safe dismantling of electronic waste.

Lito Ferreras, manager of the cooperative’s material recovery facility, said workers there wear gloves and know how to handle and store hazardous substances.

Scavengers and informal recyclers may one day find jobs with cooperatives or e-waste facilities set up through EPR agreements, Dizon said.

Until then, Danilo and his neighbors will continue to plant vegetables in the garbage dump where they also collect old appliances and electronics, and burn PVC-coated copper wire that emit carcinogenic smoke.