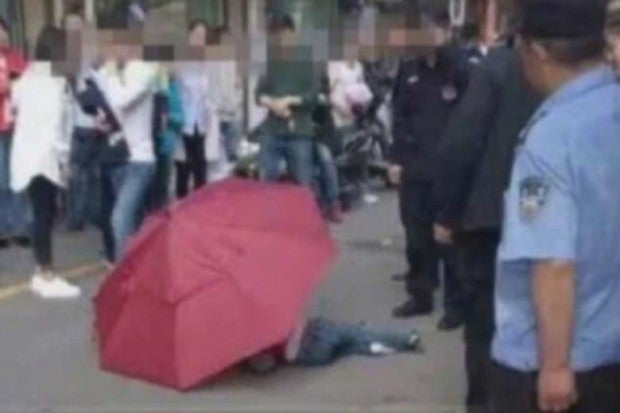 Chinese boy tried to use an umbrella as a parachute and jumps 10 storeys, but survives. PHOTO: WEIBO

A child in China who jumped from about 10 storeys using an umbrella as a parachute miraculously survived, reports said.

The seven-year-old jumped holding an umbrella after seeing a cartoon character parachute from a window doing the same thing.

While his apartment in Suzhou, Jiangsu is on the fifth floor, the height is equivalent to 10 storeys as the residences are penthouse duplexes, Chinese reports said.

But it was not the umbrella that saved him. His fall was broken by a power line, witnesses said.

His injuries were serious, but were no longer life threatening after emergency surgery, his doctor said.

He understood from relatives that the boy, who was not named, was watching a cartoon where a character used an umbrella as a parachute to jump from a height.

The boy was caught on a power line about two storeys from the ground before falling to the ground.

There have been other cases where children in China have hurt themselves while trying to imitating cartoon characters, Sohu.com said.

A similar incident was reported in Urumqi in Xinjiang last month  when a five-year-old girl used an umbrella to jump from the 11th floor.

She landed on a platform on the fourth floor and was taken to the intensive care unit.

Last December, a girl tried to climb down the water pipes outside her apartment and fell five storeys. She was badly hurt.

She had missed her mother and wanted to go and look for her, but the front door was locked. She got the idea of climbing down the pipes from cartoons she had watched, the report said.

In another case in March last year, a 10-year-old girl used a saw on her five-year-old sister’s face after seeing it in a cartoon on television. The younger child was cut in the nose and face./rga