The Revillas’ tragedy out of Shakespeare 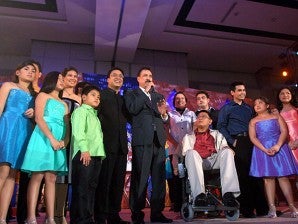 The current series of unfortunate events seems like a Shakespearean tragedy crossed with the family patriarch Ramon Revilla Sr.’s fantasy caper “Nardong Putik.” But for the show-biz-and-politics Bautista-Revillas, it’s all too real.

Lolit Solis, manager of actor-turned-senator Ramon “Bong” Revilla Jr., on Saturday likened the ongoing family drama involving his half-siblings to “a teleserye … a triple tragedy”—Ramgen Bautista was murdered, his brother Ramon Joseph (RJ) and sister Ramona were tagged as suspects, and RJ is now in jail and Ramona has fled overseas.

Revilla Jr. said the whole thing was “a nightmare.”

And it was not the first time for Ramona to break their father’s heart, he said, adding that at the time of Revilla Sr.’s first heart attack in November 2008, Ramona married a Turkish national without the old man’s permission.

The senator’s own siblings are also trying to cope, he said, adding:

“The entire clan has been hit hard. Mabigat ito (This is a heavy burden). But we’re solid. I love all of my brothers and sisters. Among Revillas, there’s no such thing as half-brother or half-sister.”

But Revilla Jr. distanced himself from his half-siblings after news broke that Ramona had left for Hong Kong. He went so far as to say that her act could be perceived as “a sign of guilt.”

He said he expected that Genelyn Magsaysay, the mother of Ramgen, RJ and Ramona, would be upset with him again.

“I have no choice. I’m caught in the middle. I have to balance my role as a son, a brother and a legislator of the country. I feel for Genelyn and her children, but I cannot interfere or initiate a whitewash,” he said.

Revilla Jr. said that among Magsaysay’s nine children, it was Ramgen to whom he was closest.

“My mom [the late actress Azucena Mortel] took care of Ramgen for a time,” he said.

He recalled that Ramgen wanted to seek public office as councilor last year, and sought his counsel.

“I told him that he was too young. (He was only 22 then.) I asked him to wait for the 2013 elections. I was impressed because he listened. He was an obedient kid,” Revilla Jr. said.

“Genelyn used to get jealous because Ramgen would often hang out at the compound [in Imus, Cavite,] with Bong’s sons Jolo and Brian,” Solis said.

“They grew up together. They were like a barkada (gang). Ramgen looked up to Bong,” she said.

Revilla Jr. said he did not know Ramgen’s siblings too well. “I only saw RJ and Ramona occasionally, during family gatherings and at Christmastime.”

In their limited time together, “RJ was always quiet and seemed well-behaved,” he said.

Solis said Magsaysay was unhappy with Revilla Jr.’s handling of the family problem: “Genelyn got mad at Bong for allowing the police to arrest RJ.”

Revilla Jr. admitted that the crisis had strained his relationship with Magsaysay. “It’s sad, but the rule of law should prevail,” he said.

Revilla Sr., himself a former actor and senator, is said to have fathered at least 80 children, nine of them with Magsaysay.

In her Facebook account two years ago, Magsaysay wrote: “To have nine children is not simple. I just get my strength from our God almighty.”

She said of her children: “They have different attitudes. Different likes and dislikes and you need to adjust. Especially [since] I’m the only one who’s facing the little troubles given us by the Lord.”

At the time of Magsaysay’s musings on Facebook, Revilla Sr., who is twice her age, had just suffered a stroke.

“I am acting not only as a mother, but as a father as well. Because of the stroke, he has to rest from real troubles and concentrate on having an intimate fellowship with the Lord,” Magsaysay wrote.

But she remained optimistic: “This is the best time after so many years of searching. Finally, he found Him, his Savior and redeemer.”

In another Facebook posting, Magsaysay described herself as “a God-fearing Christian, simply loving the Lord. Committed to the Lord in every given situation. Surrounded by the angels of Christ as my protector.”

The last big family gathering was daughter Ramlyn’s graduation party held at the Manila Hotel in April. Revilla Sr. and Magsaysay, along with RJ, were present.

Ramona is not seen in most of the pictures in the Facebook account because she was already based in Turkey then, according to Revilla Jr.

Among the photos are those of the young Magsaysay with Revilla Sr. and with then teen stars Sharon Cuneta and Gabby Concepcion on the set of a TV show.

Magsaysay, who belongs to the clan of the late President Ramon Magsaysay, was never an actress and has been confused with teen star Jenny Lynn in earlier reports.

“It was Genelyn’s mom, Linda Madrigal, who was in show biz. She was a sexy star in the 1970s,” Solis said. “But I think Genelyn also wanted to join the movies.”

Said host German Moreno: “She’s not the Genelyn of ‘That’s Entertainment.’ Our Jenny Lynn is already based in the United States. I got confused.

“But Genelyn used to visit the set of my old TV shows ‘Germspesyal’ and ‘GMA Supershow.’ I also guested Ram and RJ on my current show ‘Master Showman.’”

Recalled Solis: “I think Genelyn and Ramon Sr. met when she was in her teens. She  became a mother at a very young age.”

According to a source who asked not to be named, “at family gatherings, Genelyn kept a low profile.”

“She didn’t call attention to herself. I appreciated that she knew her place as second wife,” the source said.

If there’s such a thing as an open marriage, there’s also a thing called an open family.

While only 40 children are acknowledged in a book found at the MemoRevilla Gallery/Museum in Cavite, Revilla Sr.’s family said more of his children had come forward through the years.

MemoRevilla, which officially opened in the town of Bacoor in March, showcases Revilla Sr.’s old photographs, newspaper clippings, and film memorabilia like his anting-anting (amulets) and “Panday” sword.

Rowena Bautista-Mendiola, Revilla Sr.’s eldest daughter with  Azucena Mortel, said it was to her that their father revealed the names of all 40 kids. But she and her family have welcomed to their home some of the others, she said.

“I know all of the 40 children. Most of them lived in our house in Cavite. My mom took care of them until she died,” Mendiola told the Inquirer on the phone Saturday.

She said all of their father’s children were welcome to visit him, especially when he fell seriously ill in 2008.

Paulo Bautista, 34, who left to live in the United States with his mother, Maria Luisa Abacan, when he was 10, finally met his father in 2007 when he came to the Philippines for a short vacation. (Abacan was an “extra” in one of Revilla Sr.’s films in the 1970s.)

The meeting of the two men was held at the Revilla home and lasted for an hour, Bautista’s cousin, Maan Escala, recalled.

“They first had small talk,” Escala said. “He asked Paulo how his mother was doing. It was good that he still remembered her. Their conversation was easy and light, but also very touching.”

Escala said that Bautista sought Revilla Sr. for his signature on birth documents, and that the meeting was arranged by Mendiola’s sibling, Andrea Bautista-Ynares.

Mendiola said there had been similar cases.

“We’re open to this. It’s no problem for us as long as they’re really our dad’s children. I think his other kids should come out now that he is still alive,” she said.

Asked whether the family had developed a method to prove Revilla Sr.’s paternity in certain claims, Mendiola said their father was keeping a DNA sample at the National Bureau of Investigation.

“I don’t know when and why he submitted it, but it’s there. It can be used to verify these people’s claims,” she said.

Mendiola, who comanages the film outfit Imus Productions with her siblings Marlon and Andrea, said her family had been close to Ramgen Bautista because the latter wanted to pursue a career in show biz.

“We hardly get to see our other siblings because they already have families of their own,” Mendiola said. She said differences within the family were unavoidable, “but our mothers raised us well.”

“We all try to get along. In fact, when Daddy is angry with a particular sibling, we try to pacify him.” she said.