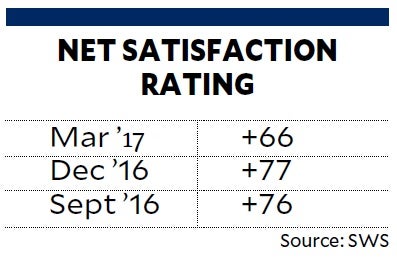 Fewer Filipinos are satisfied with the Duterte administration’s campaign against illegal drugs, as they express worry that they will fall victim to extrajudicial killings, according to the latest survey by Social Weather Stations (SWS).

The survey, conducted on March 25-28, showed that public net satisfaction rating of the war on drugs declined to +66 in the first quarter of 2017.

It was an 11-point drop and one grade down from the “excellent” +77 that the campaign received in December last year.

In another survey, conducted by Pulse Asia in March, President Duterte was the only official who received majority approval and trust scores across geographical areas and socioeconomic classes.

In the SWS survey, a majority or 73 percent of respondents were worried that they or someone they knew would be victims of executions.

In December 2016, 78 percent feared that they or someone they know would be killed in the drug war.

An overwhelming majority, or 92 percent, of the respondents also noted that it was important to capture drug suspects alive. It was 94 percent in the September 2016 and December 2016 surveys.

Filipinos were still divided on police claims that drug suspects who were killed supposedly resisted arrest. Twenty-four percent said the police were telling the truth, 31 percent answered otherwise, and the remaining plurality 44 percent were unsure.

The SWS survey, conducted among 1,200 adult respondents, had a margin of error of plus-or-minus 3 percent for national percentages.

In the Pulse Asia survey, approval of Vice President Leni Robredo declined 4 points to 58 percent, while her trust scores decreased 2 points to 56 percent.

Respondents’ approval of Senate President Aquilino Pimentel III remained unchanged at 55 percent, while trust in him increased by a point to 51 percent.

Trust scores of Alvarez and Sereno each fell by a point to 37 percent and to 40 percent, respectively.

The Pulse Asia survey, which used face-to-face interviews, was conducted on March 15-20 and had a margin of error of plus-or-minus 3 percentage points.

Malacañang on Tuesday said that Mr. Duterte remaining the most trusted government official in the country showed that his administration was on the right track.

He noted that the survey was conducted during the filing of an impeachment complaint against the President and the Senate appearance of Arturo Lascañas, a confessed hit man who said he killed people on Mr. Duterte’s orders when Mr. Duterte was Davao City mayor. —REPORTS FROM YUJI VINCENT GONZALES, INQUIRER RESEARCH AND LEILA B. SALAVERRIA