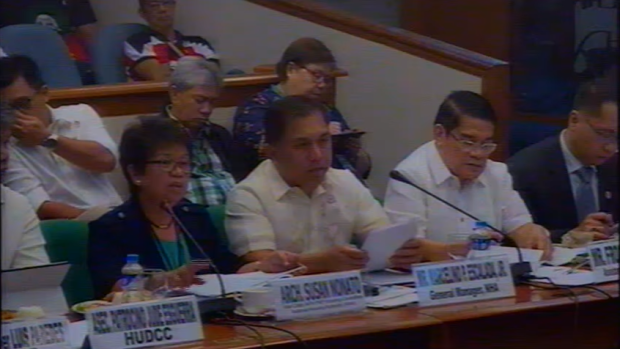 NHA and HUDCC officials face the Senate probe on the state of government housing units. SCREENGRAB FROM SENATE LIVESTREAM

The National Housing Authority (NHA) has approved bigger housing units for the military and police personnel from 22 square meter (sqm) floor area to 44 sqm, an official told a Senate hearing on Tuesday.

Architect Susan Nonato, group manager of NHA, said that as early as November last year, President Rodrigo Duterte directed the NHA and the Housing and Urban Development Coordinating Council (HUDCC) to immediately improve the government housing projects for the military and police.

“Our NHA management now approved the increase of the lot area from 40 sqm to 80 sqm lot area and the floor are from 22 to 44 under the AFP/PNP housing program,” Nonato said during the hearing of the Senate committee on urban planning, housing, and resettlement .

“As agreed with the AFP/PNP housing boards, immediate occupancy of the housing units will be required,” added Nonato, who is also vice chair of AFP-PNP housing committee of NHA

The NHA and the AFP/PNP housing boards also agreed, among others, to conduct a joint inventory of the housing units, including actual occupancy per site.

Nonato said the NHA will also require all developers of the housing units to immediately install powers and water facilities and construct a guard house and entrance gate for identity.

Duterte earlier promised to build better houses for the military and police personnel after members of the urban poor Kadamay occupied the more than 5,000 housing units in Pandi town and San Jose del Monte City.

READ: Duterte vows to give housing units in Bulacan to Kadamay

On Villanueva’s query, NHA General Manager Marcelino Escalada Jr. disclosed that only, 8,240 of the 66,184 government housing projects were occupied .

The NHA head explained that after the NHA financed and constructed the units, they turned over them to the beneficiaries.

“So in terms of seemingly the delay or what causes the both boards —the AFP and the PNP—why did the award take so long, I think that is a question that we can ask of course our partner who are the supposed to be the beneficiaries…” Escalada pointed out. IDL/rga