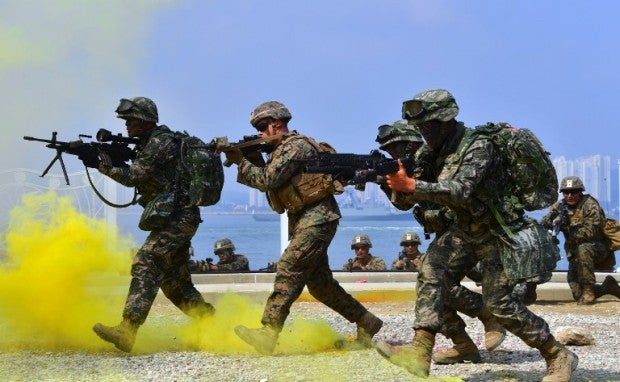 South Korean and US marines move to a position during a re-enactment of the Incheon landing to mark the 66th anniversary of the start of Operation Chromite, the battle that turned the tide in the Korean War, in the western port city of Incheon on September 9, 2016. On Friday, April 14, 2017, China warned that war could break out ‘at any moment’ on the Korean Peninsula over North Korea’s nuclear ambitions. AFP

BEIJING, China — China issued a stern warning Friday that a conflict over North Korea could break out “at any moment”, as Pyongyang vowed a “merciless” response to any US military action.

Tensions in the region have surged to fresh heights in recent days with speculation mounting that the North is preparing a sixth nuclear test.

A US naval strike force has been deployed near the Korean peninsula, and President Donald Trump has issued stark warnings that the threat posed by Pyongyang’s nuclear weapons program “will be taken care of”.

A clearly rattled China, under pressure from Trump to prevent any North Korean provocation, said the situation had reached breaking point.

“One has the feeling that a conflict could break out at any moment,” Chinese foreign minister Wang Yi said.

“If a war occurs, the result is a situation in which everybody loses and there can be no winner,” he added during a joint press conference in Beijing with the visiting French foreign minister.

Wang’s comments mirrored a warning from the North Korean foreign ministry’s Institute for Disarmament and Peace that “thermo-nuclear war may break out any moment”.

North Korea has invoked similarly dire scenarios on previous occasions when tensions on the Korean peninsula have spiked, but Beijing’s warnings have fueled international concerns that the current situation is reaching tipping point.

The North’s Korean People’s Army (KPA) added its voice to the bellicose rhetoric on Friday with a statement threatening strikes against US military bases and other targets in South Korea.

“The closer such big targets as nuclear powered aircraft carriers come, the greater would be the effect of merciless strikes,” said the statement carried by the North’s official KCNA news agency.

Citing the recent missile strike Trump ordered against Syria — which was widely interpreted as a warning to Pyongyang — the KPA denounced the US president for embarking on a path of “open threat and blackmail” against the North.

It also urged Washington to “come to its senses” and find a “proper” solution to the current stand-off.

Trump’s military muscle-flexing was on display again Thursday when the US on dropped the biggest non-nuclear bomb it possesses on Afghanistan, targeting a complex used by the Islamic State group.

The American president has repeatedly said he will prevent Pyongyang from its goal of developing a nuclear-tipped ballistic missile capable of reaching the mainland United States.

A White House foreign policy advisor said Friday that the US was assessing military options, and added that another provocative test was a question of “when” rather than “if.”

Satellite imagery analysis has noted activity at the North’s main nuclear test site ahead of Saturday’s 105th anniversary of the birth of the country’s founder leader Kim Il-Sung.

The North’s sabre-rattling has encouraged a rapprochement between Trump and his Chinese counterpart Xi Jinping, who met face-to-face for the first time late last week at Trump’s Mar-a-Lago resort.

Though his election campaign was marked with acerbic denouncements of China’s “rape” of the US economy, Trump dropped his anti-China bombast in Florida, afterwards hailing an “outstanding” relationship with Xi.

But he insists China — the North’s sole major ally and economic lifeline — must exert more leverage on Pyongyang to abandon its nuclear ambitions or suffer the consequences.

Beijing has long opposed dramatic action against the North, fearing the regime’s collapse would send a flood of refugees across its borders and leave the US military on its doorstep.

The report gave no reason for the suspension, but noted that Air China has taken similar action in the past because of low passenger volumes.

Despite the mounting tensions, there has been little sign of strain on the streets of Pyongyang in recent days, where the focus has been on preparations for Saturday’s anniversary.

Before the international press and tens of thousands of his adoring citizens, he cut a wide red ribbon to rhythmic cheers, before waving and returning to his Mercedes limousine. CBB

Read Next
4 drown in Pangasinan on Good Friday
EDITORS' PICK
USAID Opportunity 2.0 calls for applicants for grants for out-of-school youth engagement
Pharmally scandal: When middlemen profit even during a pandemic
The crisis within: Suicides rise as COVID takes its toll on lives, livelihood
DOTr to defend proposal to increase passenger capacity in public transport
Legarda emphasizes role of ICC/IPs in nation building this IP month
Work-From-Home is here to stay and requires reliable logistics
MOST READ
Bongbong says PH should modernize infrastructure to become Asia’s next logistics hub
PDP-Laban’s Cusi wing inks coalition deal with Reform Party
Robredo on vote buying: That might be taxpayer’s money so accept it, but vote based on conscience
Karen Davila’s son survives second full-blown seizure, now well
Don't miss out on the latest news and information.