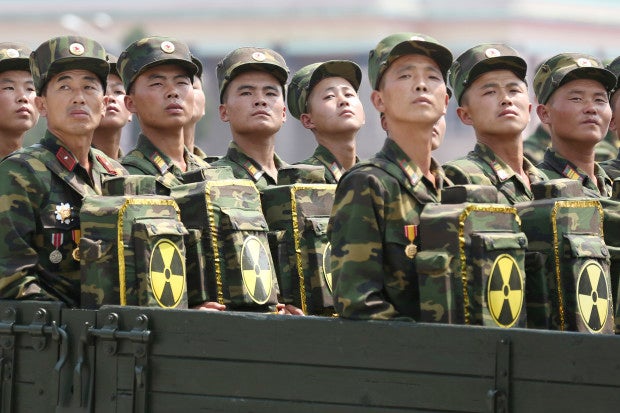 In this July 27, 2013, file photo, North Korean soldiers turn and look towards leader Kim Jong Un as they carry packs marked with the nuclear symbol at a parade in Pyongyang, North Korea. North Korea’s vice foreign minister Han Song Ryol said in an interview with the Associated Press on Friday, April 14, 2017: “We’ve got a powerful nuclear deterrent already in our hands, and we certainly will not keep our arms crossed in the face of a U.S. pre-emptive strike.” (AP Photo/Wong Maye-E, File)

WASHINGTON—The United States is assessing military options in response to North Korea’s weapons programs, a White House foreign policy advisor confirmed Friday, saying another provocative test was a question of “when” rather than “if.”

As speculation mounted that Pyongyang is preparing to fire a trial nuke or missile on a major anniversary Saturday, the official said the United States was poised to deal with the security threat posed by North Korea’s nuclear ambitions.

“Military options are already being assessed,” the adviser said on condition of anonymity to discuss a sensitive topic, describing a fresh test as “possible.”

There are reports of activity at a nuclear test site in North Korea ahead of Saturday’s 105th anniversary of the birth of the country’s founder Kim Il-Sung.

“They have telegraphed a bit, it’s no surprise that the anniversary is on Saturday, traditionally he has the big parade and rolls out his weapons and his mock weapons,” said the adviser.

“Unfortunately it’s not a new surprise for us, (North Korean leader Kim Jong-Un) continues to develop this program, he continues to launch missiles into the Sea of Japan. With the regime it’s not a matter of if, it’s when.”

The comments came after President Donald Trump told reporters that the “problem” of North Korea “will be taken care of.”

READ: US gambles on stopping a North Korean missile strike

The ominous comments came the same day the US military dropped the biggest non-nuclear bomb it possesses on Afghanistan, targeting a complex used by the Islamic State group.

READ: US drops ‘Mother Of All Bombs’ in Afghanistan

Trump also flexed his military muscle last week by ordering cruise missile strikes on a Syrian airbase the US believed was the origin of a chemical weapons attack on civilians in a northern Syria town.

And a US aircraft carrier and its naval strike group has been diverted to the Korean peninsula.

Trump has repeatedly said he will prevent Pyongyang from developing a nuclear-tipped ballistic missile capable of reaching the United States.

It was a main topic of discussion when Trump met then president Barack Obama shortly after the November election, with Trump being warned he may face a difficult choice early in his presidency.

Trump subsequently asked his advisers to give him all options for dealing with the nuclear-armed North.

But privately the White House acknowledges that striking North Korea would be a “much more complicated piece of business” than the Syria strike, in the words of a second senior administration official.

Any US strike on North Korea could prompt retaliation against allies or US forces in South Korea or Japan.

But there are few good diplomatic or economic options for the Trump administration.

The North is already under multiple sets of United Nations sanctions over its nuclear and ballistic missile programs, and appears to see these programs as insurance against regime change.

In a Wall Street Journal interview, Trump said a recent meeting with China’s President Xi Jinping dissuaded him of the notion that Beijing could compel North Korea to change course.

“After listening for 10 minutes, I realized it’s not so easy,” Trump said.

“I felt pretty strongly that they had a tremendous power” over North Korea. “But it’s not what you would think.”

On Saturday Trump will dispatch Vice President Mike Pence to the region to firm up resolve among allies.

Pence will visit South Korea, Japan, Indonesia and Australia, with North Korea high on the agenda in each capital.

With the exception of Indonesia, the United States has a treaty obligation to come to the defense of all those countries — an obligation Trump has sometimes appeared to call into question.

Pence will be looking to assure allies that commitment is “ironclad,” according to one White House official.

“We are fully committed to our security alliances, especially in the face of our evolving security challenges, as we’ve seen the nuclear threat of North Korea.”