5 men nailed to crosses in Pampanga city, 9 more to go 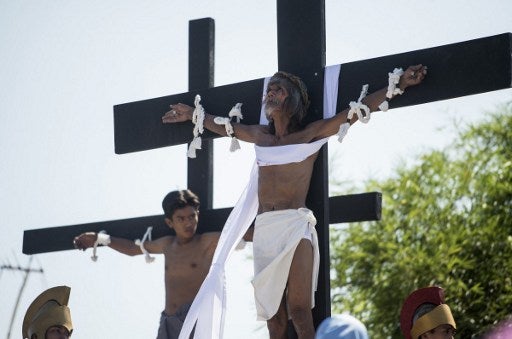 Willy Salvador (R), 60, hangs from a cross as part of his penitence during a reenactment of the crucifixion of Jesus Christ for Good Friday celebrations ahead of Easter in the village of San Juan, Pampanga, north of Manila on April 14, 2017.
Devotees in the fervently Catholic Philippines nailed themselves to crosses and whipped their backs in extreme acts of faith that have become an annual tourist attraction. AFP PHOTO

CITY OF SAN FERNANDO—Five men were nailed to crosses in two villages here and nine more were scheduled to go through their very painful “panata (vows)” until 3 p.m. on Good Friday.

Alex Larang, 61 and Willie Salvador, 57, volunteered to undergo the crucifixion rite in Barangay (village) San Juan while Danilo Ramos, 46, Fernando Mamangun, 47, and Melchor Montoya, 45, subjected themselves to the same rite in nearby Barangay Sta. Lucia.

Ruben Enaje, 56, is also scheduled to be nailed to the cross for the 31st time since 1986. Eight other men are set to go through the rite in Purok Cuatro, a local version of Calvary, in Barangay San Pedro Cutud in this Pampanga capital.

Real-life crucifixion has been a Good Friday expression of sacrifice, thanksgiving or repentance in San Pedro Cutud since itinerant faith healer Artemio Anoza started the practice in 1962.

15 crucified on Good Friday in Pampanga