Russia asked to end alleged killings of gays in Chechnya 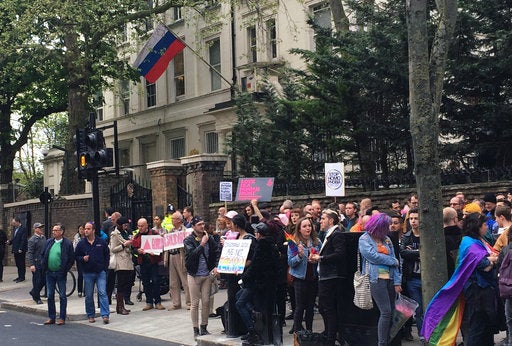 People protest outside the Russian Embassy in London, following reports of the torture and murder of gay men in Chechnya, Wednesday April 12, 2017. The United Nations’ High Commissioner for Human Rights called upon the Russian government in a statement “to put an end to the persecution of people perceived to be gay or bisexual, while Chechen authorities denied the reports, and spokesman for leader Ramzan Kadyrov insisted there were no gay people in Chechnya. (Thomas Hornall/PA via AP)

MOSCOW— International organizations on Thursday urged the Russian government to investigate the reported abuse and killings of gay men in Russia’s southern republic of Chechnya.

The respected Russian newspaper Novaya Gazeta reported earlier this month that police in the predominantly Muslim republic of Chechnya have rounded up more than 100 men suspected of homosexuality and that at least three of them have been killed.

Chechen authorities have denied the reports, while the spokesman for leader Ramzan Kadyrov insisted there were no gay people in Chechnya.

The United Nations’ High Commissioner for Human Rights called upon the Russian government in a statement “to put an end to the persecution of people perceived to be gay or bisexual … who are living in a climate of fear fueled by homophobic speeches by local authorities.”

Separately, the director of the human rights office at the Organization for Security and Cooperation in Europe, Michael Georg Link, said Thursday that Moscow must “urgently investigate the alleged disappearance, torture and other ill-treatment” of gay men in Chechnya.

After two separatist wars in the 1990s, predominantly Muslim Chechnya became increasingly conservative under late President Akhmat Kadyrov and then his son Ramzan.

Novaya Gazeta also reported this month that Chechen authorities are running a secret prison in the town of Argun where men suspected of being gay are kept and tortured.

Russian man tortured to death for ‘being gay’