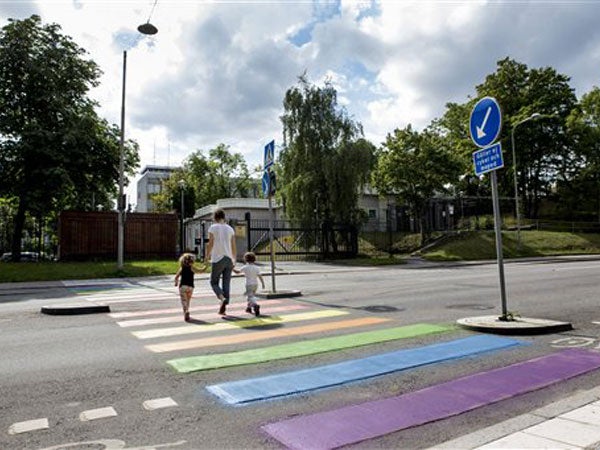 The zebra crossing outside of the Russian embassy in Stockholm Sunday Aug. 11 2013 which gay rights supporters have painted in the colours of the rainbow following angry exchanges during the previous week’s Pride festival over the country’s treatment of gay individuals. Russia’s new law, recently signed by President Vladimir Putin, imposes fines and up to 15 days in prison for people accused of spreading “propaganda of nontraditional sexual relations” to minors and hefty fines for holding gay pride rallies. AP

MOSCOW – Maria and Alexandra vaguely considered leaving Russia for several years, but it was not until this year’s anti-gay legislation that they started to gather paperwork.

The quiet, academic lesbian couple, who live with a seven-year-old daughter in the outskirts of Moscow, have now lost hope that Russia is moving in the direction of Europe, where same-sex marriages are increasingly legalized despite opposition from conservatives.

“Before, there was hope that everything would improve, but instead the trend has reversed. I hope that we will leave,” said Maria, 31 who has a daughter Lilya from a short-lived marriage. She is now raising her with her partner of six years, Alexandra, 30.

Earlier this year President Vladimir Putin signed a law banning the dissemination of “gay propaganda” to minors, which has already prompted an international outcry and even calls for Russia to be stripped of its right to host the Winter Olympics.

In practice, the law means that anyone in Russia can be fined for telling children that homosexual and heterosexual relationships are equal. This “really speeded us up” in wanting to leave the country, Maria said.

Everyone interviewed by AFP for this article requested that only first names are used, and some asked that even the first names are changed, in order to keep their identity secret.

The women have started an application process for residency in Canada, where Alexandra, a research scientist, qualifies as a young professional and can bring the whole family of three over under the country’s conditions for same-sex couples.

The gay propaganda law is just the beginning, they said, pointing out recent remarks by lawmaker Yelena Mizulina that the state should have the right to take children out of homosexual families.

Gays are enemy number one

Mizulina has said the family committee she is chairing in the Duma lower house is writing a new family policy based on “traditional” values like registered heterosexual marriage and refusal of abortions.

“We are looking into the possibility of creating a legal basis for taking children out of families that are de-facto gay marriages,” said Mizulina, who has also sponsored a bill banning adoptions by foreign same-sex couples.

Last month, Russia’s influential Orthodox Patriarch Kirill called the increasing legalization of same-sex marriage in other countries a “syndrome of apocalypse” which Russia must fight.

Militantly conservative rhetoric has come amid increasing intolerance. Since 2005, the number of people who believe gays should have equal rights as the rest of society fell from 51 to 39 percent this year.

The number of people who believe that homosexuality is an illness or is caused by “licentiousness” also grew from 67 to 78 percent in that period, according to Levada center pollster.

Violent crimes committed against gays are rarely investigated, according to Moscow-based lawyer Ilnur Sharapov who had represented people injured at gay protests by neo-Nazi or ultraconservative Orthodox activists.

“Hooliganism and injury cases very quickly reach trial unless the victim is gay,” he told AFP.

In the increasingly homophobic environment, gay parents now worry what will happen if their child is asked about their home situation in school.

“It’s a question of our mutual trust on the one hand, and of her safety in society on the other hand,” said Olga, 34, a lesbian who has a small daughter, explaining that she does not want to lie to her child when she is old enough to understand.

“Once the government singled out gays as the enemy number one, it became clear that it’s time to go,” she said. She is taking language classes and saving money to move to Poland, where she can legally repatriate because of her heritage.

A chain of silence

Single mothers, or two women living together with a child are a familiar picture in Russia.

But in a country where men almost never get custody in a divorce, gay men have to be more circumspect, said Artyom, 30, who recently became a biological father to twins and is helping a lesbian couple raise them.

“I wanted children, it was a conscious decision, I looked for candidates online,” said Artyom, 30, who works as a doctor in Saint Petersburg.

He and the babies’ mother married when she was pregnant, and their parents happily help out in full ignorance that his wife is in a long-term relationship with a woman. He spends time daily with the children, feeding, changing, and taking them for walks.

“We’ll keep our anonymity, the semblance of a regular traditional family,” said Artyom, who posted pictures from his wedding on his social networking page. “It’s a working legend,” he said. “Many people do the same.”

“If everything was quiet, like in our family where we quietly got married, then maybe there wouldn’t be so many problems,” including the latest anti-gay laws, he said.

Artyom’s view that gays should keep quiet about who they are is very widespread. The gay propaganda law was protested only by a handful of people.

“It’s like a chain of silence,” said Alexandra. “When someone is oppressed, they become silent themselves. But that’s a loser’s position, so we plan to flee.”