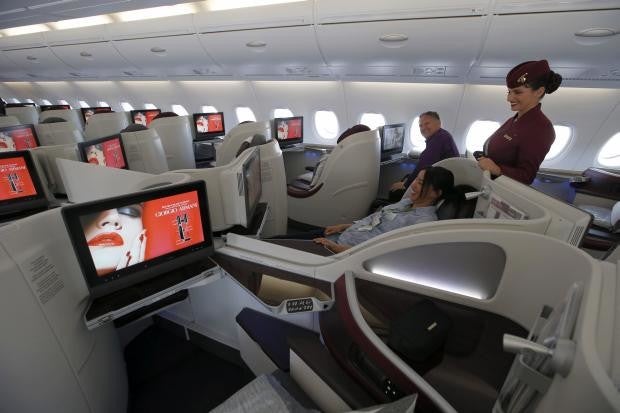 This photo, taken on June 17, 2015, shows an interior view of the Business Class seats on the second floor deck of an Airbus A380 of Qatar Airways presented at the Paris Air Show, in Le Bourget airport, north of Paris. Qatar Airways updated an app on Wednesday, April 12, 2017 for its iPhone app says it “doesn’t support drag and drop. We take care of customers as we unite them with their destinations.” (Photo by FRANCOIS MORI / AP)

Dubai-based Emirates released an ad after video went viral of a United passenger being forcefully removed that toyed with the Chicago-based carrier’s longtime slogan. “Fly the friendly skies … this time for real,” it read.

Royal Jordanian tweeted a no-smoking picture saying “drags on our flights are strictly prohibited by passengers and crew.”

Now Qatar Airways is getting in on the gag too. An update Wednesday for its iPhone app says it “doesn’t support drag and drop. We take care of customers as we unite them with their destinations.”

Emirates and Qatar have been criticized by US carriers over their rapid US expansion. All three airlines have been caught up in the US ban on electronics onboard.