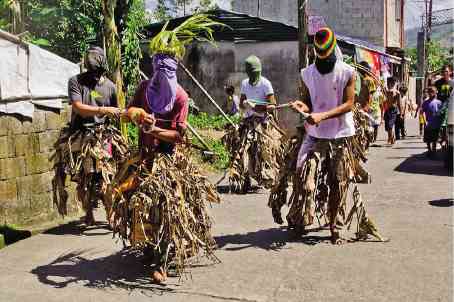 PENANCE Penitents walk barefoot throughout Pakil town in Laguna province while flogging themselves as a form of sacrifice during Holy Week. —CHRIS QUINTANA / CONTRIBUTOR

PAKIL, Laguna—On ordinary days, Romualdo Echavarria, 40, is a butcher in this sleepy town in Laguna province. During Holy Week, however, he turns into a faceless flagellant, whipping his bleeding back while roaming the streets of Pakil barefoot.

Echavarria is a member of “Hugas Dugo,” a group of locals who perform the religious ritual of self-flagellation as a form of penance.

But no one knows exactly when the group was formed.

Local welder Danilo Olit, 46, Hugas Dugo’s current president, said the group was already existing when he settled in Pakil some 20 years ago.

Olit, the leader of the group for 10 years now, started self-flagellation 26 years ago. Echavarria, on the other hand, has been doing it for 30 years.

Self-flagellation was considered a form of corporal punishment back in the day for people who had sinned, said Father Mario Rivera, 51, parish priest of the St. Peter of Alcantara parish here.

“You have sinned, I will beat you – that is the idea. It came to a point where this form of physical punishment became part of the [practices of the] church,” Rivera said.

“This is an akò (to carry someone’s burden),” said Echavarria.

He said they were offering themselves in behalf of a sick family member so they would be healed. In Echavarria’s case, he started flagellation for his mother who was suffering from different ailments.

Olit took to self-flagellation because of a sick uncle back in his hometown of Capalonga in Camarines Norte province.

According to Rivera, the Catholic Church is not encouraging people to punish or harm themselves as a form of penance.

“The focus of the Church now is more on spiritual penitence,” he said.
When Olit became Hugas Dugo president, he said he increased from 18 to 24 the minimum age of men who can perform self-flagellation.

In the past, younger participants had collapsed during the ritual. “They could not handle it. They thought it was easy,” he said.

A few days before Holy Week, Hugas Dugo members clear an area under a bridge in Barangay Rizal where their trek throughout town will begin and end. Money collected from members is used to buy food that will be prepared for the flagellants for the week.

Olit said members were given designated days for the ritual and were discouraged to join for consecutive days.

The whips have 13 wooden sticks attached to it, representing Jesus Christ and his 12 disciples, Echavarria said.

Flagellants wear old shirts that are torn to expose their backs. They put on a “skirt” made of dried banana leaves, not for aesthetic purposes but to catch blood that would drip down their backs once they start whipping themselves.

They walk around town while whipping their backs. They stop at certain areas where other members are stationed to have their backs cut and lashed again.

Along the way, the flagellants’ backs are sprayed with water from bottles carried by a group of boys that follows them throughout the procession.

The St. Peter of Alcantara parish church is the flagellants’ last stop. Outside the church, the flagellants’ backs are cut and lashed for the last time, and they spend some moments praying silently.

Olit said he was once summoned to the parish church and explained to Rivera that the practice had been there for as long as he could remember. He said the priest let them be, but not without some reminders.

“If this cannot be prevented, just do not forget to go to confession because that is the form of penance that the church acknowledges,” Rivera said.

Read Next
No travel, no shower on Good Friday
EDITORS' PICK
ING Pay is the safe and reliable way to pay – here’s why
TECNO Mobile sparks up summer with fun livestreams, great prizes
PGH seeks more plasma donors as it loses 5 patients to COVID-19 daily
House-to-house COVID-19 testing pressed to get ‘true’ PH state
WATCH: INQside Look on the upcoming 2022 polls with Comelec spokesperson James Jimenez
Smart is fastest 5G Network in PH – Ookla
MOST READ
PH military pouring naval, air assets near site of Chinese incursions in WPS
US adds 116 countries to its ‘Do Not Travel’ advisory list
PH-Canada labor agreement coming soon – DOLE
Ganging up on a good thing
Don't miss out on the latest news and information.