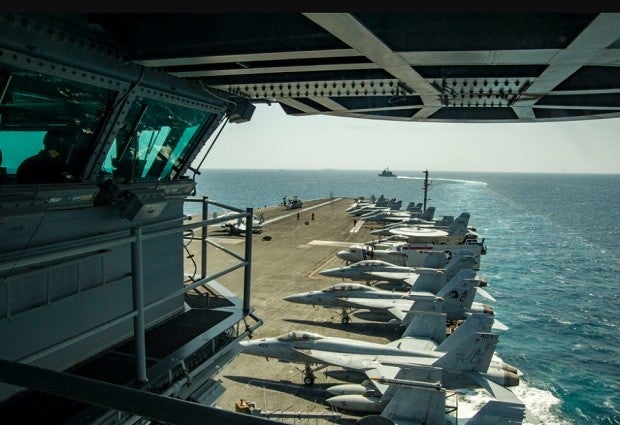 As President Donald Trump warned that the US was ready to deal with North Korea alone, another carrier strike group was preparing to respond to a “crisis anywhere on the planet.”

The US Navy said the Eisenhower Carrier Strike Group was conducting a sustainment exercise to prepare it for deployment. It is led by the nuclear-powered USS Dwight D. Eisenhower, a Nimitz class aircraft carrier.

“Sustaining the readiness of this strike group—so it is ready to respond to a crisis anywhere on the planet–is a bargain and an important part of what our Navy’s Optimized Fleet Response Plan does for the nation,” said Adm. Phil Davidson, commander of the U.S. Fleet Forces.

Last week, the US naval strike group led by the supercarrier USS Carl Vinson sailed to the Korean Peninsula reportedly to boost the defense against North Korea’s nuclear posturing.

On Tuesday, Trump tweeted that the US was ready to take on North Korea if China would not do anything to stop Pyongyang’s continuing development of nuclear weapons and intercontinental ballistic missiles.

“North Korea is looking for trouble,” Trump posted on Twitter. “If China decides to help, that would be great. If not, we will solve the problem without them! U.S.A.”

Fresh from a tour in the Arabian Gulf, Red Sea and the Eastern Mediterranean, the Eisenhower Carrier Strike Group is comprised of the USS Eisenhower, the guided-missile destroyer USS Mason, and guided-missile cruisers USS San Jacinto and USS Monterey.

The Eisenhower is host to several squadrons of strike aircraft as well as air surveillance and electronic warfare planes. CBB