Couple linked to terror group to be deported 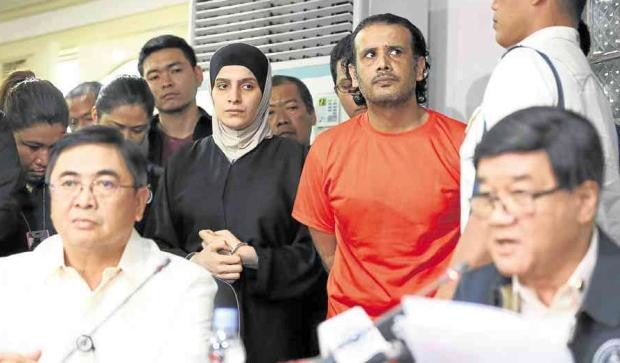 The Bureau of Immigration has started deportation proceedings against the foreign couple arrested for their suspected links to the terrorist group Islamic State (IS).

It was likely that the woman, Syrian national Rahaf Zina, would be the first to leave the country since she was unable to present documents proving the legality of her stay here.

On the other hand, Kuwaiti national Husayn Dhafiri was in possession of a working visa valid for three years.

“Zina’s case is being considered by the BI board of commissioners; we just need (National Bureau of Investigation) clearance that she has no pending case,” BI spokesperson Antonette Mangrobang said.

The couple was arrested on March 28 for violating immigration laws but also on suspicion that they had links to the terror group.

Read Next
DID YOU KNOW: Treaty of Paris
EDITORS' PICK
Mallorca City: Home of Cavite’s finest industrial hub
18 patients probed for COVID-19 discharged from hospitals — DOH
The fight of the decade: The Gypsy King vs The Bronze Bomber
COVID-19 spreads in South Korean city as thousands are screened
New virus has infected nearly 78,000 people globally
Tokyo 2020 postpones volunteer training over virus fears
MOST READ
Honda to shut down Laguna plant
LOOK: Heart Evangelista wears ‘Quiapo headband’ at Paris Fashion Week
It was DILG that blamed Estrada for Manila’s failure to pass standards – Isko Moreno
Vice President Robredo’s mother passes away at 83
Don't miss out on the latest news and information.