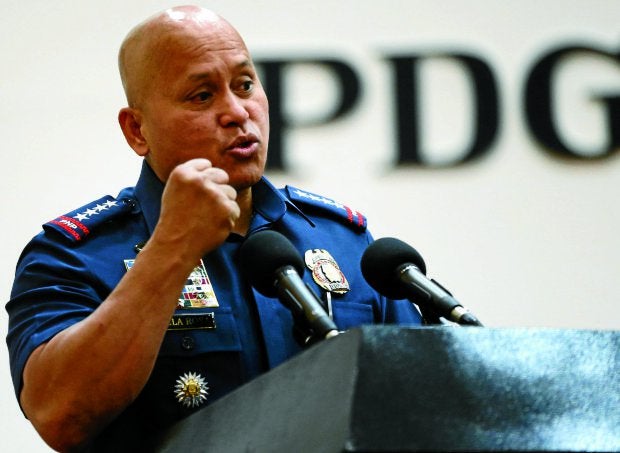 MANILA — Saying lawmen should “not be afraid to die,” Philippine National Police (PNP) Director General Ronald Dela Rosa promoted on Monday, the policeman who stopped a bus robbery in Quezon City, by shooting dead the robber and arresting his two accomplices.

Dela Rosa promoted PO2 Joselito Lantona to the rank of Police Officer 3 for his role in stopping the robbery-holdup of a Diamond Star bus bound for Valenzuela in the early hours of April 4. He also gave Lantona a Glock pistol.

“Don’t be afraid to die…if there’s a hold up, hit back. Don’t fall back. You should be prepared to engage the enemy all the time,” Dela Rosa told the gathered policemen in his speech in Camp Crame after promoting Lantona.

“After the shooting, you should be the one always left standing and the enemy slumped on the ground. I want this to be very clear to you: No human rights will feed your children when you are killed,” he said.

“No human rights will send your children to school if you are killed. So, you should stay alive and do your job properly,” he added.

Lantano, a member of the PNP-Police Security and Protection Group in Camp Crame, was on board a bus on his way home to Bulacan when the robbery happened at around 2:15 a.m.

“When we got to (Mega) Q Mart, someone fired a shot so I was alerted. The (ticket) conductor ran to the driver and told him we were being held up,” Lantano said.

“I held my gun and when I turned to one side while I was seated, we saw each other and he lifted his gun. I introduced myself as a policeman and I also lifted my gun,” he said.

“We lifted our guns at the same time. He pointed his gun at me but I was able to pull the trigger first,” he added.

Lantano said he thought about his family as the drama unfolded.

“I thought I should be first (in firing my gun) because I would have been killed if I did not pull the trigger,” he added.

Lantano then told the other passengers to put their hands on their heads and, with the help of responding policemen, he was able to arrest two alleged accomplices of the dead suspect, who was identified as Eduardo Gimenteza.

“I’m thankful that I was given a higher rank,” Lantano said.