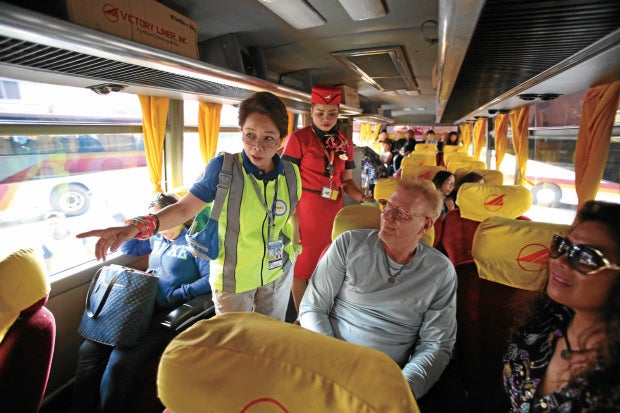 MANILA — The government has gone on heightened alert and has prepared its law enforcement and safety units for the anticipated Holy Week exodus of people traveling across the country, Presidential spokesperson Ernesto Abella said on Monday.

Abella said the heightened alert status being observed by the government would ensure  “the safety and security of passengers at all airports, seaports, and other transportation hubs during the Holy Week.”

President Duterte left on Monday for a week-long trip to the Middle East and he has designated Executive Secretary Salvador Medialdea the government caretaker during his trips abroad.

“We have in place Oplan Biyaheng Ayos: Semana Santa 2017,” Abella said in a statement as he cited the tasks undertaken by concerned government agencies to ensure the safery of commuters and passengers.

Abella said the Philippine National Police has deployed 75,000 police personnel for patrol duties and transport terminals not only for the Holy week but also for the summer season, which has normally seen a big domestic traffic.

Abella said the Land Transportation and Franchising Regulatory Board (LTFRB) for instance has issued 1,153 special permits to bus operators to accommodate the increase in the number of passengers. The agency is now inspecting buses to ensure their road worthiness and safety and has also set up help desk terminals.

For the expected traffic build up, the Toll Regulatory Board (TRB) has deployed additional personnel at toll plazas.

Abella said the Manila International Airport Authority (MIAA) would help the Bureau of Immigration (BI) in managing the lines at immigration counters, noting that an MIAA Management Team started to be on duty on April 8 to ensure smooth passenger flow.

A two-minute unloading rule has also been implemented to prevent congestion, he said.

A task force was also put up in Cebu, the Mactan Cebu International Airport Authority (MCIAA) and the airport police division has gone on red alert.

Random inspection of passengers has been conducted since April 7 by the Maritime Industry Authority (MARINA) so as to implement the “no overloading” policy.

Passengers will be screened strictly after the Philippine Port Authority ordered its personnel to ensure their security and safety.

“Setting things in place, and ensuring proper and efficient functioning and coordination of the agencies are but the initial steps of the entire process. “Ultimately, his satisfaction can only be measured by the extent that the public’s safety and convenience are facilitated and guaranteed by the government,” Abella said.  SFM