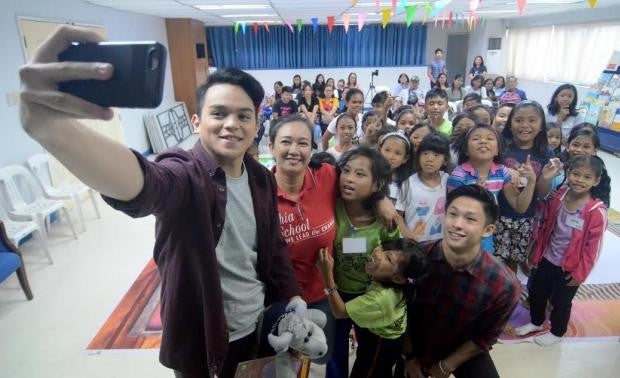 Actor Miggy Jimenez takes a picture of participants in the Inquirer Read-Along session on Saturday, April 8, 2017. Beside him is Ann Abacan, principal of Sophia School, and fellow actor Nikki Co (in plaid shirt). (Photo by ARNOLD ALMACEN / Philippine Daily Inquirer)

On Saturday, the eve of Palm Sunday, three storytellers for the Inquirer Read-Along session told Inspiring tales of forgiveness and humility to some some 40 less privileged children.

A returning Read-Along storyteller, Jimenez read the biblical parable of the “Unforgiving Servant” as retold by Boots S.A. Pastor. It’s about an ungrateful servant who, after being forgiven by the king for his debt, refuses to do the same act to another servant who owes him money.

Co read another popular parable, “The Prodigal Son,” also retold by Pastor. It tells about a son who exhausts his share of his father’s inheritance to live a sinful life until he realizes his mistakes and returns home to ask for forgiveness.

Abacan, meanwhile, read “Ispageti: Naiibang Kaarawan” by Dudi Gamos, a story about a young boy named Rene who invites less privileged kids to his home to share his birthday food.

For Jimenez, someone’s act of kindness does not necessarily have to be returned to the same person but could be reciprocated to others instead.

“You must not take for granted the forgiveness from someone you owe,” he said. “Instead, you could do the same thing to others who owe you”

Co reminded the kids to always look for the good side of a person, regardless of how much they had sinned against you.

“Forgive and give them a chance to change,” he said.

Launched in 2007, the Inquirer Read-Along program aims to combat the declining readership among students by encouraging children to get into reading at a young age in order to build a nation of readers that is vital in building a nation of leaders.

In the past decade, over 20,000 children aged 7 to 13 from more than 50 cities nationwide have joined the sessions, which have featured over 400 celebrities and role models as storytellers. /atm