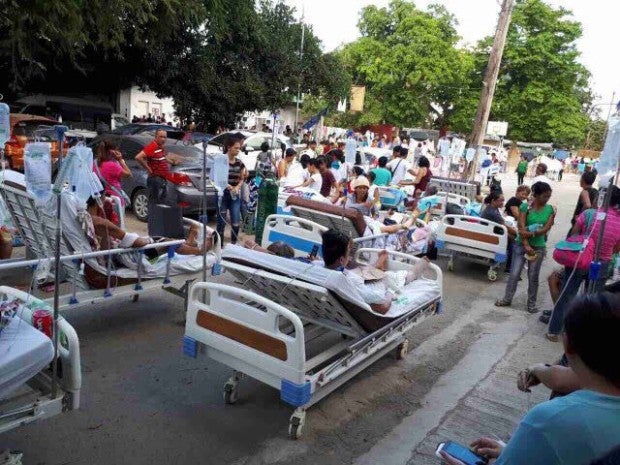 Patients were evacuated from the Batangas Medical Center shortly after a series of earthquakes that hit Mabini in Batangas. (Contributed photo by KRISTINE DE VERA)

A series of tremors that hit Batangas on Saturday afternoon, with magnitudes between 5 to 6, were apparently part of an “earthquake swarm,” which had been going on since since Tuesday evening, according to the Philippine Institute of Volcanology and Seismology (Phivolcs).

The first tectonic earthquakes on Saturday hit only minutes apart, at 3:07 p.m. and at 3:09 p.m., and were felt as one long earthquake – lasting from 10 to 15 seconds – in affected areas.

Two other earthquakes originating from around the same epicenter was recorded at 3:53 p.m. and 3:59 p.m.

The first two of the land-based Saturday quakes, originating in the vicinity of Mabini town, were both stronger than the 5.5-magnitude temblor originating near the island of Tingloy, Batangas on Tuesday, with the first Mabini quake having a magnitude of 5.6, and the second reaching magnitude 6.

The third moderately-sized earthquake in Batangas on Saturday was of magnitude 5.1 and the fourth, magnitude 5.3.

The consecutive earthquakes were felt at varying intensities in the following areas;

According to reports reaching Phivolcs, the effects of the quakes were felt even in Olongapo in Central Luzon.

“There is no danger of tsunami, but with Intensity VII, we expect damage,” Phivolcs supervising science research speciality Jeffrey Perez said, in an interview

Saturday’s quakes, he added, could worsen the damage wrought by the Tuesday temblor.

As of this writing, no reports of liquefaction or ground ruptures have come in.

Perez attributed the quakes with similar magnitudes to the movement of active local faults in Mabini, Batangas.

“We’re looking at this as a series of earthquakes since Tuesday,” Perez said.

He describe an earthquake swarm as a series of moderately-sized earthquakes in the same area over a certain period of time.

“It’s like there were big boulders that have moved, and until now are still moving, trying to return to a stable state,” Perez explained.

He said that, since the Tuesday evening temblor, 991 aftershocks had already been recorded as of 3:00 p.m on Saturday, with 21 being felt.

These, too, were part of the earthquake swarm, he said.

The Phivolcs expected further aftershocks, but it could not say definitely whether the next quakes would be stronger or weaker.

Though the Mabini fault was far from and had no effect on Metro Manila’s faultlines.

“It’s a warning that we really need to prepare, if we’re affected even by faults that are far from us,” Perez said. “The whole country has a lot of local faults that generate moderate to strong earthquakes. Each province has their own ‘Big One’.” /atm