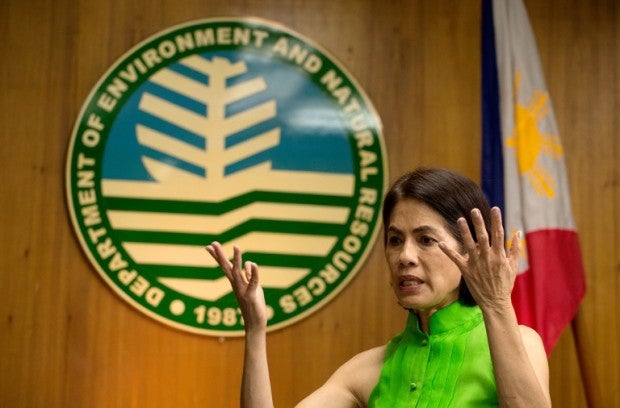 Environment Secretary Gina Lopez has put her foot down on a new policy requiring suspended mine firms to put up a multimillion “trust fund” for farmers before they can clear their nickel stockpiles.

In the face of mounting complaints from mine firms against the policy, Lopez insisted the directive was within her authority as chief of the Department of Environment and Natural Resources (DENR). The Mines and Geosciences Bureau (MGB) is under the DENR.

“I’m just saying I want the mining companies to pay, to go to farmers that have been disadvantaged….out of the rehabilitation area,” Lopez said, in a chance interview with the media on Friday. “That’s my prerogative in the DENR. What’s wrong with that?”

“In my authority in the DENR, why can’t I say: ‘You’re going to make billions of pesos here. Why can’t you put aside a certain amount of money for the farmers disadvantaged because of your practices?’” she added.

On Jan. 30, Lopez issued a memorandum to the MGB In response to mining contractors’ requests to be allowed to remove nickel ore stockpiles from their mining areas following their suspension as early as September,

In that memo, Lopez said the DENR would allow the stockpile removals on condition that the mining contractors “place in a trust fund the amount of P2 million per hectare of disturbed land, to be used to further mitigate the adverse impacts of the operation to the environment and to the affected communities.”

The new policy was reiterated in another memorandum she issued on March 6.

She shrugged off reports that the mine firms had taken their complaints to the Commission on Appointments and the Office of the President.

“Then question it,” she said. “In the Mining Act, it says we should take care of our resources in a way that benefits the community. If somebody’s doing mining at maraming magsasaka na nagdudusa (and many farmers are suffering), that’s against the law.”

Asked what would happen if the mine firms wouldn’t comply with the trust fund requisite, Lopez stood firm: “If they want to remove the stockpiles, they should comply. Should we let them make all this money and the farmers suffer? That’s not fair. If I, as DENR secretary, allowed that to happen, I’m not doing my duty. They’re going to make a billion pesos from the stockpiles, what’s P2 million per hectare to put there? It’s the right thing to do.”

Asked about observations the trust fund issue was delaying the removal of the stockpiles before the rainy season sets in, Lopez reiterated it was then up to the mine firms to comply with her directive to get the job done soonest.

“How can they not have money?” she asked.

In her Jan. 30 memo, Lopez acknowledged that the removal of nickel ore stockpiles from the mine areas would also “prevent environmental damages, particularly siltation.”

In Zambales province alone, Lopez pointedo out, there were 2.6 million tons of nickel stockpiles, which she claimed would make “almost a billion pesos” for the mine firms.

She added that there 55 hectares of mine-affected farmlands in the province.

Over the past week, the DENR, with the National Bureau of Investigation, accosted nickel ore hauling by the suspended mine firms in Zambales.

In a statement, the Concerned Citizens of Sta. Cruz Zambales, as well as other civil society organizations under anti-mining group Alyansa Tigil Mina, said they were “guarding” the exit points of Zambales to stop the dump trucks of four suspended mining companies from hauling ore out of the province.

Last April 6, up to 30 dump truck carrying nickel laterite ores were confiscated by the NBI in the port of Binabalian and Bolitok in Zambales, where the mine firms load their stockpiles.

Benito Molino, CCOS chair, called the hauling of ores “illegal” since the Mineral Production Sharing Agreements (MPSAs) of the mine firms were already cancelled by the DENR last February.

Molino also noted that the companies were not complying with Lopez’s directive regarding the trust fund.

“We salute Gina Lopez for the swift action in stopping mining operations destructive to the environment,” Molino said

“But these mines didn’t comply with the order of DENR,” he went on. “Instead, Mines and Geoscience Bureau (MGB) III OIC-Regional Director Lope Cariño gave these mining companies an Ore Transport Permit (OTP) and the miners are using it to cover-up their continuous operation.”

He added that Zambales Gov. Amor Deloso gave the mine firms permission without a public consultation, talking only to barangay chiefs. /atm