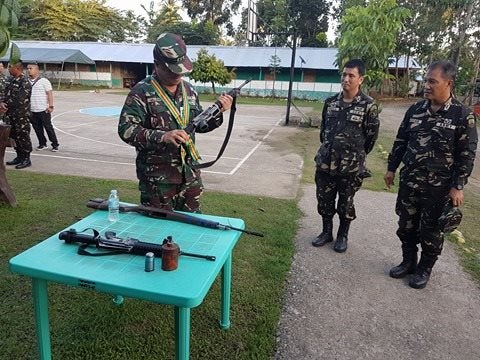 The Army seized high-powered firearms and overran a rebel camp in Davao Oriental on Thursday, the military said.

After the firefight, the soldiers discovered a rebel camp, a temporary harbor site that can accommodate about 40 communist rebels.

Thursday’s encounter was the third between the 28th IB and communists of PBC 6 since March 30, with no reported casualties on the government side. The rebels suffered an undetermined number of casualties.

Cabales said there were reports of evacuations from the villages of Tagbinonga, Buso, Don Martin Marundan and Don Salvador Lopez in Mati City due to the fighting.

The government and communists have signed an interim joint ceasefire agreement during the recently concluded fourth round of peace talks in The Netherlands, but the military leadership said it would continue its operations until the guidelines and ground rules for the declaration of a bilateral ceasefire were approved. CBB/rga