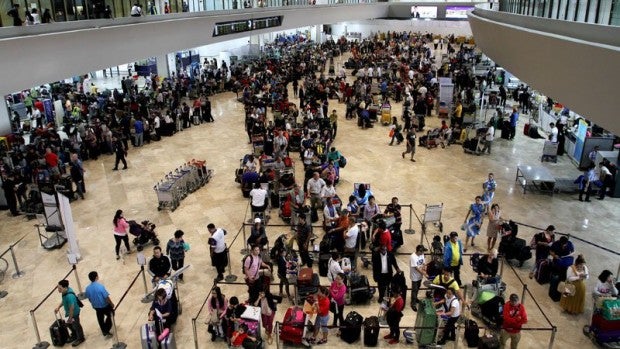 With the expected influx of people to the Ninoy Aquino International Airport during Holy Week, the airport authority has cancelled the leaves of absence of all its employees to ensure there will be sufficient personnel to handle passenger concerns.

At a press conference on Thursday at the Naia Terminal 1 for the Miaa’s “Oplan Semana Santa,” Monreal said the immigration office at  Naia has agreed to allow Miaa workers to take over the task of sorting queues at the BI counters.

“I noticed that immigration officers are managing the queues at the BI counters. With their current numbers, I volunteered for Miaa workers to take over the task at the arrival and departure areas so the immigration’s extra manpower can just man the counters,” Monreal said, adding that  Miaa can spare about 90 employees.

He said details will be fleshed out on Friday in another meeting with BI port operations division chief Marc Red Mariñas who said the shortage in manpower should be addressed soon with at least 120 personnel from the immigration head office to be assigned to the Naia’s three terminals.

“We are also hoping that the problem of the BI is resolved soon so our passengers won’t suffer any longer,” Monreal said.

The airline firms have also given leeway for passengers who might miss their flights because of the queues at the immigration counters. But the Philippine Airlines has asked its passengers to come in at the airport at least five hours before their international flights in anticipation of the long lines.

In a statement, PAL spokesperson Cielo Villaluna said: “This is a safety net to ensure that passengers have enough lead time to make it to their flights… Once the Holy Week is over and the immigration counter concern is resolved, this will mean we go back to the three hour lead time for PAL international flights.”

Meanwhile, Civil Aviation Authority of the Philippines deputy director general for operations Skee Tamayo said his agency is making sure that everything is in place during the Holy Week—one of the three annual peak travel seasons along with Halloween and Christmas.

Tamayo said all area center managers were directed to make sure everything is in place in the 35 Caap-managed domestic airports using established procedures for the peak travel seasons.

“In all airports nationwide, we have to make sure that navigational aids, like runway lights, are in working condition and double-checked so there will be no issues on safety and disruptions.”

For his part, Monreal said the Miaa will pitch in on traffic management chores, particularly at  Naia Terminal 3.

“We are just asking our passengers to strictly follow the rules, including the two-minute parking at the departure area. Let’s not be stubborn and cooperate so as not to inconvenience other passengers,” he said.

He advised passengers to come to the airport at least three hours before an international flight and two and a half hours before a domestic flight to cope with the traffic as well as the strict security check at Naia.

Help desks as well as free water stations will also be set up at the predeparture areas of the four Naia terminals and priority assistance will be given to the elderly and persons with disability.