Birthday cakes for 2 in Arroyo bash 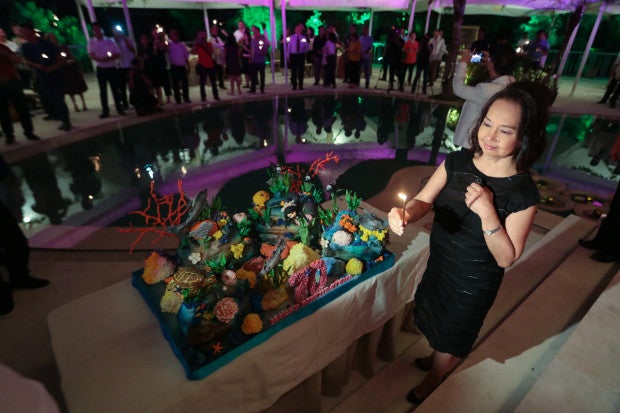 Former President and Incumbent Pampanga Second District Representative Gloria Arroyo makes a wish before blowing the candle of her birthday cake during the celebration of her 70th birthday at La Vista Subdivision in Quezon City on April 5, 2017. President Rodrigo Roa Duterte was one of the guests during the former President’s birthday. ALBERT ALCAIN/Presidential Photo

There were two birthday cakes at the 70th birthday bash of former President Gloria Macapagal-Arroyo in her home at the posh La Vista Subdivision in Quezon City on Wednesday. One was for the Pampanga representative and the other, for one of her well-wishers, President Duterte.

The President, who came with partner Honeylet Avanceña and their daughter Veronica, turned 72 on March 28. He spent his birthday in his Davao City home.

Arroyo, whose birthday cake featured an undersea theme, presented Mr. Duterte with his own cake topped with a man on a motorcycle—presumably a replica of him—with a “DU30” license plate.

Mr. Duterte has a known fondness for motorcycles, although he has since scaled back on his two-wheeled adventures.

The President delivered a message to Arroyo, his ally in the House of Representatives.

Arroyo earlier thanked Mr. Duterte for “allowing due process to take its course” after the Supreme Court dismissed her plunder case last July, effectively freeing her from detention.

Arroyo had also served as Deputy Speaker at the House, which is controlled by the President’s allies, but was ousted from the position after voting against the death penalty revival bill.

Arroyo remains supportive of the administration.