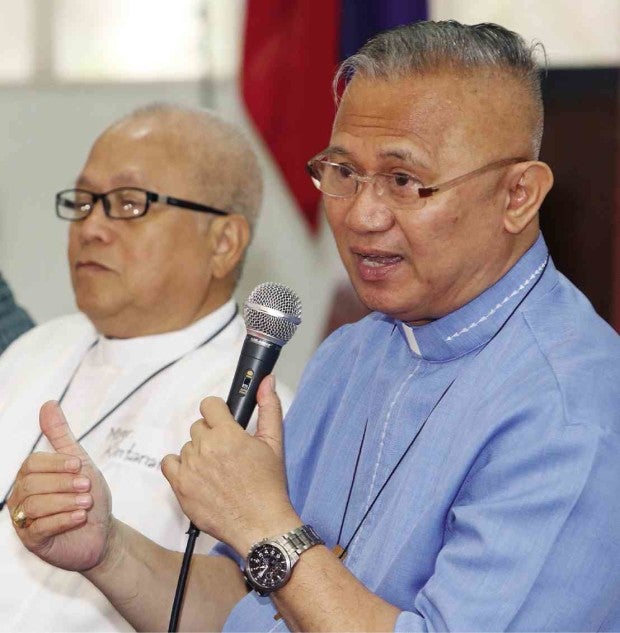 CEBU CITY — The head of the country’s biggest archdiocese has an unsolicited advice to President Duterte: Think first before opening your mouth.

Cebu Archbishop Jose Palma said the President apparently didn’t know what he was talking about when he predicted that the Church would become irrelevant in 30 years.

“The President has forgotten that the Catholic Church has been here for over 2,000 years now. Emperors and kings come and go but the Church has remained,” he said in an interview after the annual Chrism Mass and renewal of priestly vows at the Cebu Metropolitan Cathedral on Tuesday morning.

“My joke is he (Mr. Duterte) must not have known what he is talking about,” he said.  Palma referred to the words of Jesus Christ, the founder of Christianity, that neither “the gates of hell shall not prevail against the Church.”

Palma said the Church would face whatever challenge Duterte would throw its way.

“But the President should know that the Catholic Church persists not because of its bishops and priests, but because of God,” he added.

In his Homily during the Chrism Mass, Palma lamented what he called as “moral illness” in the land.

“The apparent indifference toward the killings in the war on drugs is but a moral illness. Enjoying and laughing at speeches peppered with curses and bad words is also a moral illness. And so we say Lord, heal our land,” he said.

Although he did not mention names, Palma was alluding to the government’s war on drugs, which has resulted in more than 7,000 deaths since President Rodrigo Duterte assumed his post last July 1.

Mr. Duterte’s speeches were often laced with expletives —one of which sideswiped even the admired Pope Francis, while eliciting laughter from some people.

He has also been relentless in his criticisms of Catholic Church leaders who have been vocal in condemning the extrajudicial killings that had attended the administration’s crackdown on the narcotics trade.

Palma urged priests and lay people to never lose hope amid difficulties and evils in society.

“We are evangelizers. Instead of presenting what is evil, let us tell the good news to people, and the good news is that amid the bad things that happen, there is still a bright spot in our community. Let us not forget that God is with us,” the Archbishop said.

He also asked the faithful to pray for their priests and bishops amid criticisms from the current administration.

“We (bishops and priests) are never worthy to be here. But we know that it was God who chose us to serve Him and His people. And so we are here. He is sending us to serve His flock,” he said.

“Please pray for your priests so that in doing our tasks, we may lead you to Christ. And please pray for me, your bishop, so that I may become a good shepherd and teacher,” he added.

Mutual prayers from priests and lay people, he said, would bring about something good in the community.

The Cebu Archdiocese, the largest in the country, currently has 413 diocesan priests, over 300 religious priests, and over a thousand religious sisters. They administer to 3.8 million Catholics in Cebu.  SFM

Read Next
Hunt on for new DILG chief as Duterte rules out tapping Bongbong
EDITORS' PICK
Karding damage to infrastructure at P23M
Bongbong Marcos says PH ‘open for business’ with new Clark Airport terminal
Sierra Madre stands up to Karding, but needs protection vs the humans it saves
Reignite your passion with the vivo Y35
House energy committee chair Arroyo bats for cheap electricity
UNFPA Philippines Career Opportunities
MOST READ
Badoy not with Office of the President, NTF-Elcac, under Marcos admin — solon
Angelica Panganiban ‘duguan, sugatang mom’ one week into breastfeeding
LPA enters PAR, may develop into tropical depression
Charges readied vs gov’t guard with P290-M deposits
Don't miss out on the latest news and information.