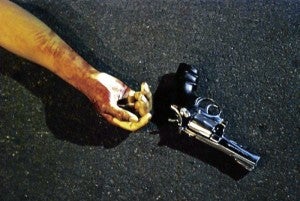 SAN PEDRO CITY — A man tagged by the police as an illegal drug pusher was killed during a buy-bust operation in Rosario town in Cavite early Tuesday.

The slain suspect, Ricky Estandarte, was the target of a buy bust operation in Barangay (village) Ligtong 4 at around 2 a.m., a report from the Cavite, Laguna, Batangas, Rizal, Quezon (Calabarzon) police stated.

The report said the suspect, sensing that he was dealing with the authorities, engaged the policemen in a gunfight. Estandarte was killed when the police retaliated.

The police said they recovered a .38-gun, a sachet that contained suspected “shabu” (methamphetamine hydrochloride) and some P300 cash.  SFM