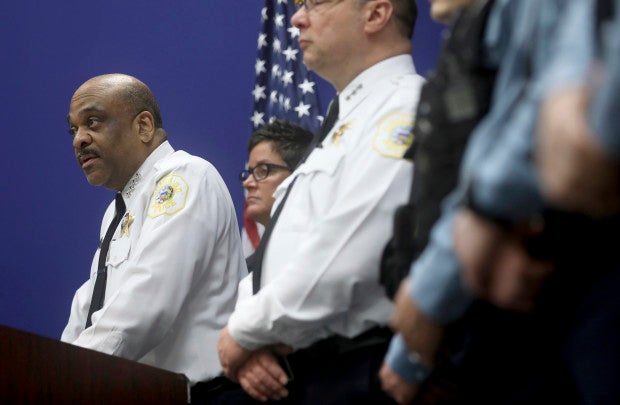 Chicago Police Department Superintendent Eddie Johnson stands with 10th District officers as he talks with reporters about charging the first of several juvenile offenders from the March 19 criminal sexual assault incident broadcast on Facebook, during a press conference Sunday, April 2, 2017, at the City of Chicago Public Safety Headquarters. AP

CHICAGO, United States — A second teenager suspected in the sexual assault of a Chicago teenager that was streamed live on Facebook turned himself in to police on Monday afternoon.

Police have not provided details about what exactly happened on March 19 when they said five or six males participated in sexually assaulting a 15-year-old girl after she was lured inside a residence by one of the suspects. But they have said that besides the cellphone camera that recorded the incident and streamed it live on Facebook, others at the scene also recorded the sexual assault.

Police say they expect other juveniles and an adult to be charged. Police haven’t released the names of any suspects.

Police have said the assault was watched live by about 40 viewers, none of whom called authorities to report what was happening. The girl’s mother later told The Associated Press that the girl and the family were being taunted online and ridiculed and harassed by children in their neighborhood.

Police say they are investigating the online comments and have executed a number of “social media search warrants.”

Police have moved the girl, whom they describe as “traumatized,” to a home outside the neighborhood. In a brief interview, the girl’s mother said Monday that her daughter remains at what police called the “safe place” and has not returned to school.

The AP generally does not identify potential victims of sexual assault and is not identifying the mother so as not to identify the girl.

Also Monday, a juvenile court hearing for the teenager who was arrested over the weekend was postponed until April 28. CBB

Read Next
Duterte sacked Sueno over loss of trust — Palace
EDITORS' PICK
Harnessing technology for quality education
Connect to PH’s fastest network with new Signature Plan Lite at only P599 per month
Hidilyn Diaz wins weightlifting gold in Tokyo Olympics
Filipinos celebrate PH’s first gold medalist Hidilyn Diaz
‘I believe’: Hidilyn Diaz bucks the odds to win historic Olympic gold
Tips for a cheerful life
MOST READ
Hidilyn Diaz wins weightlifting gold in Tokyo Olympics
Go to war with China over West PH Sea? It will be a ‘massacre’, says Duterte
FLASHBACK: The day Hidilyn was shocked over inclusion in oust-Duterte matrix
Hidilyn shoots not only for gold but also for permanent place in PH sports history
Don't miss out on the latest news and information.