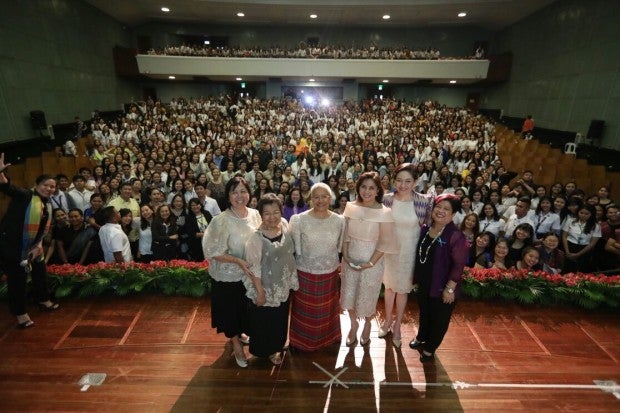 Vice President Leni Robredo on Thursday addressed for the first time the rape threat made against her three daughters by a Facebook user last month, telling her young audience at a women’s forum that they should band together, even online, to fight the prevailing “culture of impunity, hate and anger.”

Robredo said this was a “difficult time” to be the Vice President, which was why she and her staff at the Office of the Vice President (OVP) had been making attempts to drown out the political noise by focusing on their poverty alleviation programs.

“You know my three daughters have been threatened with bodily harm, with rape, and these are all online. If you’re alone, you will be scared,” Robredo said at the gathering at Miriam College in celebration of International Women’s Month.

The Vice President mentioned the threat to her daughters—Aika, Tricia and Jillian—in response to a high school student’s question on how young girls like herself could “defend and uphold their own rights, at a time like this when security is very fragile.”

In February, a male Facebook user expressed anger at Robredo apparently for her stance against extrajudicial killings and the restoration of the death penalty.

Calling Robredo a “fake” Vice President in his Facebook post, the man taunted her that he would rape her daughters but that she should forgive him and grant him a “second chance.”

The OVP kept silent about the threat, which was denounced by Robredo’s supporters online, until the Vice President herself mentioned this on Thursday.

“It’s better to equip yourselves with information, it’s better to engage. If you can do something about changing the conversation online, please do,” Robredo said.

Robredo told her audience, comprised mainly of young women, that keeping silent would only allow the lies to prevail and “breed a culture of impunity, a culture of hate, a culture of anger.”

She said that if people—young and old—failed to act accordingly, the country would “spiral down.”

“Even if you are still very young, you have the capacity to save the country from evil,” Robredo said, encouraging everyone to do his or her own share in saving the country from “the fear of being sucked into a dark hole.”

Robredo was one of the five women in politics and governance that were awarded by the Women and Gender Institute on Thursday. The other awardees were: Sen. Risa Hontiveros; former Peace Adviser Teresita Deles; former Social Welfare Secretary Dinky Soliman; and former Commission on Human Rights chair Etta Rosales.