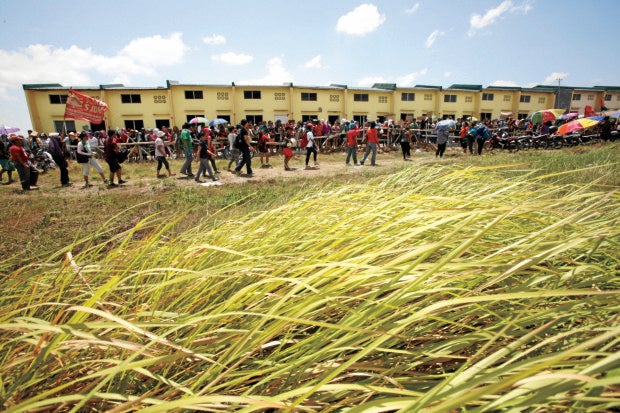 SUPPORT FOR SETTLERS Kadamay and other groups hold a “People’s Caravan” to support families that have occupied the government-owned housing project in Pandi Heights III in Pandi, Bulacan province. —PHOTOS BY NIÑO JESUS ORBETA

PANDI, Bulacan—Domingo Mendoza, 54, an embroiderer and construction worker, put up a bamboo fence in the front yard of the house that he claimed at Villa Elise in Barangay Masuso here on April 1.

He and his siblings gave up their family’s ancestral home at Sitio Pasong Kalabaw in Barangay Poblacion here in 2007 to raise money for the treatment of his mother who suffered from colon cancer. His mother died despite their best efforts.

“We now live in the house of my brother but it stands on a land that has been mortgaged and could be taken away anytime,” Mendoza said.

He said he had applied for housing projects operated by the NHA and the Pandi municipal government for the past six years.

“When I first applied for low-cost housing, I was a bachelor. I now have a wife and children, and neither the NHA nor the municipal government has responded to my application,” he said.

Members of the urban poor group Kalipunan ng Damayang Mahihirap (Kadamay) planned as early as last December the occupation of the houses on March 8.

Marian Cornelia, a former migrant worker who occupied one of the units at Residence 3 social housing site in Barangay Mapulang Lupa here, said her group took over the houses after learning that housing projects in the province had not yet been occupied by their beneficiaries.

Almost all of these projects were developed by the NHA, which is tasked with building houses for low-income families.

Last week, the agency lifted its eviction orders after Kadamay agreed to undergo screening and validation to determine if its members were eligible for low-cost housing.

That process began on April 3. Applicants who are granted houses are required to gradually pay P240,000 each for the units.

Many of the occupied houses are incomplete. Some have no doors, windows and toilets. But Kadamay members said they fought to keep these units regardless of their poor state.

There was nothing secret in the Kadamay meetings, according to its members. Some meetings were dispersed by policemen who assumed the gatherings were a recruitment drive, said Cornelia.

Cornelia spent 10 years as a caregiver in Singapore, Hong Kong and Canada, sending her earnings to her family in Negros Oriental province.

She sent four of her seven siblings to school and spent for her parents’ day-to-day needs until nothing was left for her to buy a house.

When she returned home, she had to rent a house at the Saint Martha government relocation site in Barangay Batia in Bocaue town, also in Bulacan.

Editha Gonzales, 60, said she sold her house in Marilao town to pay for the medical expenses of her ailing husband. “We applied for a house with the NHA but we were ignored. We found a house when we joined Kadamay,” she said.

Gonzales, who has been dependent on her husband’s social security pension, brought along her two grandchildren when she occupied a house in Villa Elise.

Naima Pineda, 37, of Cebu province, was renting a house in Bocaue for P2,500 a month. She said she applied to the municipal government for a house in 2014 but her application had not prospered.

“We joined Kadamay because we had no house of our own. Our P2,500 monthly rent did not leave my family enough money left,” she said. “Now we are happy. Villa Elise is a nice place. It’s very quiet.”

Cristina Alojacin, 50, of Bacolod City in Negros Occidental province, who occupied a unit in Villa Elise, said she was willing to pay the monthly amortization for the house rather than pay rent.

Marissa Palomeno, 52, a fish vendor in Metro Manila, used to share a house with her son in a Pandi government relocation site. But the house has become too crowded so she joined Kadamay’s occupation of the houses.

Eduardo Capiral, 55, from the Bicol region, has been working as an embroiderer while his wife works in a garments’ shop. They decided to occupy an NHA house to save the family from paying P4,000 in monthly rent.

Why the government never got a whiff of the planned occupation of unused and incomplete low-cost houses in Bulacan remained a mystery.

Kadamay members planned the occupation of houses after nothing happened to their request for houses that they presented at a meeting in Malacañang last December and during a housing summit in January, according to Cornelia.

“We were being given the runaround so many of us thought of just occupying the houses,” she said.

She said the families would voluntarily leave the houses if the owners could prove their ownership.

Kadamay had asked the NHA for the list of the units’ beneficiaries but it said the agency had not complied.