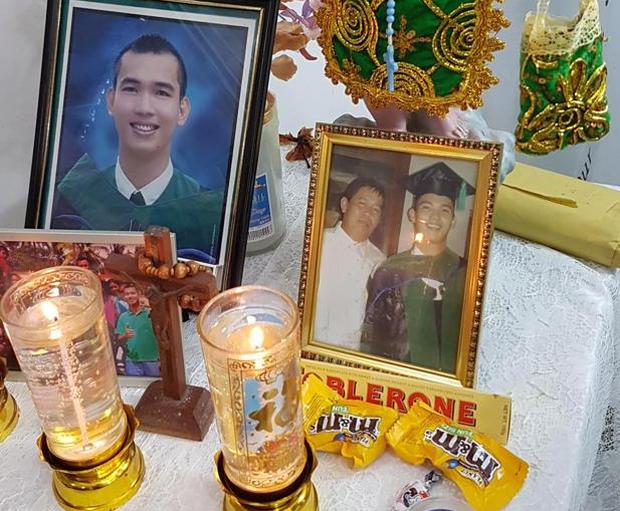 In this March 10, 2017 file photo, Dr. Dreyfuss Perlas’ favorite chocolates are placed beside his framed photographs near his coffin during the wake held for him in Aklan. (Photo by NESTOR P. BURGOS JR./ INQUIRER VISAYAS)

ILOILO CITY — A woman and three men have been tagged by police in the killing of rural physician Dr. Dreyfuss Perlas.

“We are confident that the information will be filed before the court and a warrant of arrest will be issued soon,” Olaguer told the Philippine Daily Inquirer on Friday.

Olaguer said they have established the full identities of two of the four respondents.

He said Perlas’ killing was work-related but he declined to give further details pending the resolution of the complaint and the issuance of the arrest warrant.

Dreyfuss, 31, died from a gunshot wound in the back that pierced his heart.

He was municipal health officer of Sapad town in the same province.

His death provoked an outcry as he was one of the few volunteer doctors who opted to stay in his area of assignment after his contract under the government’s Doctors to the Barrios program ended.

A native of Batan town in Aklan, Perlas was also well-loved by the community he served and people whom he had helped and worked with lauded him for his generosity and dedication

As his family marked the first month after his killing, his father vowed to continue searching for justice for his eldest child.

“We are praying that those responsible will be arrested soon,” he told the INQUIRER.

During the municipal council’s session on Tuesday, councilor Rina Sarceno sponsored a proposed ordinance to declare March 1 as a holiday in the municipality in honor of the slain physician.

The Department of Health earlier conferred the “Bayani ng Kalusugan” award to Perlas for his service to the community.

The award which was given starting last year honors individuals and organizations who have given exemplary contribution to the achievement of universal health care.

The killing of Perlas has shaken Batan, a laid-back town with 33,000 residents.

In his homily during the burial of Perlas on March 11, Fr. Adolfo Depra, one of the 10 priests who celebrated the requiem Mass, said it was rare for Batan to be in the headlines and sad that when it finally was in the news, it was due to the death of Dreyfuss Perlas.  He reflected on how a quiet town like Batan was suddenly thrust into the most serious and intense event.

He lamented the killing of a young man who had yet to reach his prime.

“Why? Why, the senseless killing? His death was ironic because he was saving the lives of others. Why?” Depra had said.  SFM