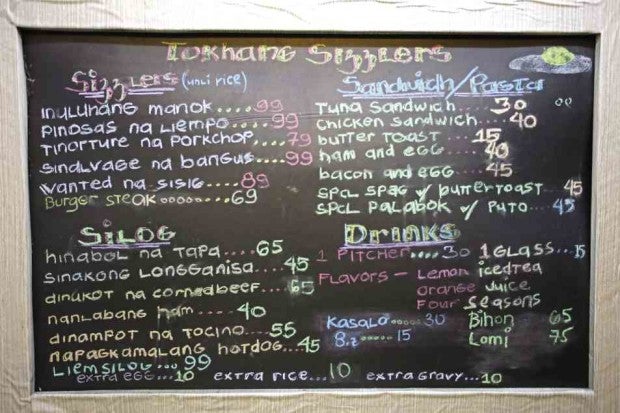 The menu in an eatery across Navotas Agora Market can make your stomach churn or make you laugh — depending on how you view the spate of drug-related killings in the country.

The eatery, called Tokhang Sizzlers, was apparently named after “Oplan Tokhang,” the Philippine National Police’s knock-and-plead program, which has taken on a more sinister meaning in slum areas, the target of most police-led drug operations.

Tokhang Sizzlers, which opened in February, offers dishes that echo recent headlines, such as hinabol na tapa, sinakong longganisa, dinukot na corned beef, dinampot na tocino, and nanlabang ham. The dishes roughly recall the chase, arrest and killing of suspects who are often found stuffed inside plastic garbage bags after being shot down for “fighting back,” according to police.

It’s reality, said the eatery’s owner. “It’s what’s happening every day. All these killings. It’s what you see on TV. These dishes, they’re meant to make people laugh, to show them reality.”

Even victims of mistaken identity were represented in the menu through a dish called “napagkamalang hotdog.”

A police mobile parked across the street prompted the eatery owner to recall an earlier incident when a cop tried to eat at the place.  “He looked at the menu, smirked, and left. Maybe, he couldn’t stomach it,” he said.

Aside from presenting reality, the dishes’ names are part of clever marketing. Said the owner’s male friend who was playing a guitar when the media arrived: “See, I told you it’s good for business.”

Witnesses said Cedro was playing street pool when shot about 1 a.m. on March 28. A barangay tanod (village watchman) rushed to the scene, sat on his haunches just outside the yellow police line, and wept. “That’s my younger brother,” Sonny Cedro said.

Two days later, during his brother’s wake, Sonny was asked what he thought about Tokhang Sizzlers. The grieving watchman smiled and shook his head. “It’s funny. It made me laugh,” he said.

In this same market last year, the Inquirer interviewed relatives and neighbors of those killed in the drug war. During one of the interviews, a 9-year-old boy egged the Inquirer to show him “Tokhang” videos, saying it was  “fun watching people get shot and fall dead.”

Killings have become such a daily experience for the metro’s poorest that a resident of Sto. Niño in Pasay City challenged those who lauded the murders to live among them in the slums.

“Maybe you should live here so you’d understand what it’s like for us,” said the resident while looking at the body of snatcher Albert Tabora evening of March 28.

The resident and his family were watching TV when Tabora’s killers brazenly shot him beside a light post that had a CCTV. Police said 14 gunshots—from head to crotch—killed Tabora.

They curled up on the bed shaking, the resident said.  “We were so scared. What if we get hit by stray bullets?” he asked.