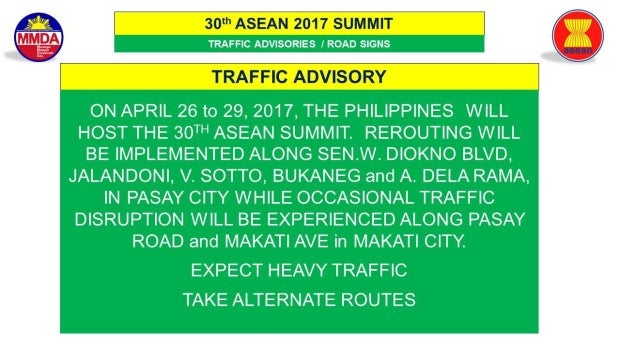 The Metropolitan Manila Development Authority on Friday announced its rerouting plan for the 30th Association of Southeast Asian Nations (Asean) Summit which will be held in the country on April 26-29.

In a Facebook post, the MMDA said that rerouting will be implemented along Sen. W. Diokno Blvd., Jalandoni St., V. Sotto St., Bukaneg St., and A. Dela Rama St.

It also warned the public of occasional traffic disruption along Pasay Road and Makati Avenue, and advised motorists to take alternate routes.

The four-day summit will take place within the Cultural Center of the Philippines Complex in Pasay City.

The Asean leaders’ meeting is set on April 29 at the Philippine International Convention Center in Pasay City, the participants will then move to the Coconut Palace for a two-hour respite before the gala dinner at the Sofitel Philip-pine Plaza hotel. The country leaders will depart the country the next day.

The Asean events that will be held in the country include the 30th Asean Summit in April; the 50th Asean Ministerial Meeting and related meetings coinciding with the regional bloc’s 50th anniversary celebration in Metro Manila in August, and the 31st Asean Summit in Clark, Pampanga in November.

PH to press code of conduct in South China Sea