NDF echoes gov’t decision not to declare ceasefire before talks 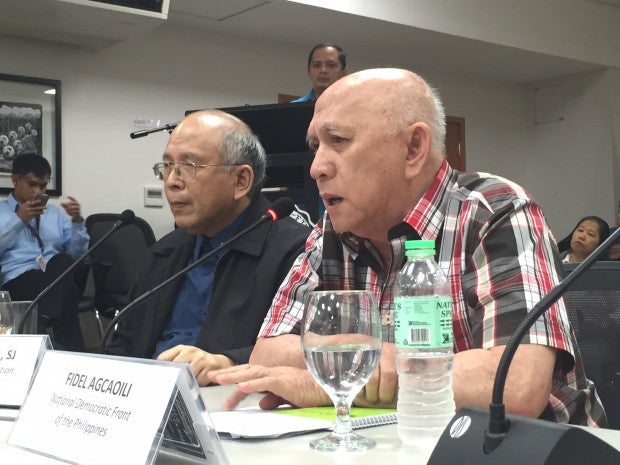 Fidel Agcaoili, (right) the spokesman of the National Democratic Front of the Philippines and Fr. Joel Tabora SJ., talk about the prospects for peace between the Philippine government and the New People’s Army on June 8, 2016, in Davao City. (File Photo by KARLOS MANLUPIG, INQUIRER MINDANAO

The CPP’s political arm, the National Democratic Front, on Friday confirmed that it agreed with government chief negotiator Silvestre Bello III on plans to declare a joint ceasefire.

READ: Gov’t says no ceasefire with Reds before fresh round of talks

“Of course,” NDF Chair Fidel Agcaoili said in a statement.

“The revolutionary movement would appear foolish and open to attacks by the AFP (Armed Forces of the Philippines and PNP (Philippine National Police) should it declare a unilateral ceasefire while the GRP would not,” he said.

This is contrary to previous reports that the CPP will revive its unilateral ceasefire by the end of March.

“This would also be a violation of the principles of parity and reciprocity between the Parties in the armed conflict,” Agcaoili said, adding that they will “aim for a simultaneous announcement.”

The fourth round of talks of the Philippine government and the National Democratic Front will resume in the Netherlands next month. IDL