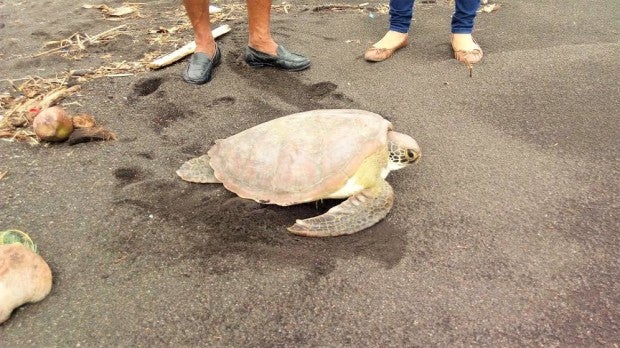 A green sea turtle is released back to the sea by officials from the Department of Environment and Natural Resources (DENR) and Naval Forces Southern Luzon personnel in Barangay Rawis, Legazpi City on Mar. 30, 2017. (PHOTO COURTESY OF NAVAL FORCES SOUTHERN LUZON)

LEGAZPI CITY – A green sea turtle (Chelonia mydas) was released and sent back to the sea, its natural habitat, by officials of the Department of Environment and Natural Resources (DENR) and Naval Forces Southern Luzon in Barangay (village) Rawis in this city Thursday.

The green sea turtle, estimated to be around 25 years old, was released at the beach of the naval station Julhasan Arasain.

The turtle was found and saved by Sonny Alcantara, a fisherman, after it was entangled in a net at Malobago village in Manito town.